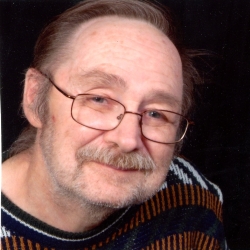 Daniel Eugene Creighbaum 68, of Plymouth passed away early Tuesday morning April 16, 2019 at his home. He was born on January 17, 1951 to Donald Boyd and Juanita (Gilley) Creighbaum in Plymouth.
Daniel graduated from Plymouth High School in 1970 and then served in the U.S. Army from 1971 to 1974 and then served with Indiana National Guard from 1974 until 1981. He was employed at Champion Home in Bremen and then worked at Glenmark as a warehouse manager for the next 25 years. He then went to Madras packaging for 5 years before retiring in 2008.
Daniel was a member of the Plymouth Moose Lodge and the House of the Lord Church of Plymouth.
Daniel collected guns, loved fishing, trains, and was an avid football fan.
He married Della Sue Sellers on December 17, 1977 in Plymouth and she survives.
Daniel is also survived by sons: Nicholas D. (Debbie) Creighbaum of Plymouth, Benjamin E. (Amanda) Creighbaum of Plymouth, Jacob A. (Kristin) Creighbaum of Evansville, daughters: Emilie S. Creighbaum of Plymouth, and Bethanie A. Creighbaum of Plymouth. Also surviving are brothers: Kent J. Creighbaum of Plymouth and Brent A. (Darla) Creighbaum of Argos. Daniel is also survived by grandchildren: Lennon, McKenzie, Jerryd, Jackson, Matthew, Emery, Noah and Colin and also several nieces and nephews.
Dan was preceded in death by his parents and his father and mother -in-law Robert and Susie Sellers.
Visitation for Daniel will be held on Monday, April 22, 2019 at the Johnson-Danielson Funeral Home, 1100 N. Michigan Street, Plymouth from 4:00 P.M.to 7:00 P.M. and funeral services will be held on Tuesday April 23, 2019 at 11:00 A.M. with visitation to be held from 10:00 A.M. until the time of the services at the Johnson-Danielson Funeral Home with the Pastor Steven Patrick officiating with burial to take place at New Oak Hill Cemetery, Plymouth.
Memorials should be directed to Kindred Hospice, 1476 W. 18th Street, Rochester, IN 46975 or House of the Lord Church, 16493 Lincoln Highway, Plymouth, IN 46563.
The family would like to extend a special thank you to the family and friends who were by our side and also a special thank you to the staff of Kindred Hospice and to everyone at the House of the Lord Church.