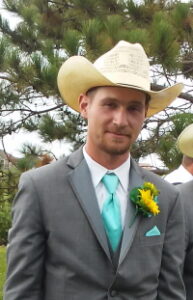 Daniel Myers Hummel, 27, left us all too soon in the late night hours of November 11, 2019.
He was born to Jerry and Ellen (Myers) Hummel of Walkerton on October 21, 1992, and welcomed home to the eager arms of two older sisters, Amanda and Betsy.
With three “mothers” he was still a wildly silly boy – always on the go or going somewhere – often on adventures on his familyâ€™s 21-acre farm, with his favorite dog Charlotte in tow. He fished in ponds, went deer hunting with his dad and uncles and grew up during the summers at the Marshall County Fair, where he was a 10-year member in beef, pygmy goats, poultry, and farm toy scene.
In high school, he played trombone in the marching band for several years but found a true home as part of the FFA at John Glenn High School, graduating in 2011. There he competed as part of the dairy and soil judging teams. Daniel then attended the University of Northwestern Ohio and earned Associate of Applied Science degrees in Agricultural Equipment and Diesel Technology, graduating in 2014.
Daniel was employed at Co-Alliance in Argos and was a former member of the Polk Township Volunteer Fire Department. Despite often being quiet and reserved, Daniel had an easy smile and made friends of all agesâ€”finding comfort talking with peers as well as the many farmers whose fields he serviced.
He leaves behind his collection of tractors that he was always rebuilding, as well as the hearts of his mother, Ellen Hummel, and sisters, Amanda (Brian) Bettag of Lafayette, IN., and Betsy (Nicholas) Loeks of Kalamazoo, MI.
Others grieving include nephews, Camden and Brody Bettag and Andrew Loeks; niece Lindsey Loeks; as well as many cousins and aunts and uncles including, Nancy Myers of South Bend; Tom (Kris) Myers of Plymouth; Dian (Alton) Hershberger of Union, MI; Carol Dove of Plymouth; Gwen (James) McGrath of Slidell, LA; Rex (Theresa) Hummel of LaPaz; Joyce Roberts of Plymouth; and a host of friends who considered him family.
He is preceded in death by his father Jerry in April of 2012; his paternal grandparents, Clyde and Margaret Hummel; his maternal grandparents, Frances (nee Emenaker) Myers and Maxine and Eldon Myers; as well as aunts Sandy Hummel, Joan Roberts, Becky Leininger and Bonnie Porter; and uncles Wes Hummel, Carl Hummel, Dean Dove and Morris Roberts.
Friends will be welcomed by the family for a visitation on Sunday, November 17, 2019, from 3-7 p.m. at the Plymouth Wesleyan Church, 11204 Michigan Street, Plymouth.
Funeral services will be held on Monday, November 18, 2019, at 11 a.m. at the Tyner United Methodist Church 4501 French St, Plymouth, IN 46572. Visitation will resume one hour prior in the church. Interment will follow at Morris Cemetery on U.S. 6, in Polk Township.
In lieu of flowers, memorials in Danielâ€™s memory may be made to Tyner United Methodist Church Missions Fund, 4501 French St, Tyner, IN 46572; or John Glenn Educational Fund, 101 John Glenn Drive, Walkerton, IN 46574.
Regretfully, Daniel made an impulsive life-ending decision that will forever affect his family, friends, and community.