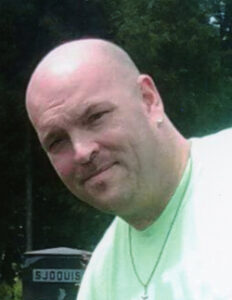 Danny Allen Korp, 49, of Riverside Drive, Knox passed away late Sunday March 25, 2018 at his residence in Knox. He was born on December 1, 1968 in Plymouth to Glen Hutchinson and Laura Bunton Arvin. He attended Bremen schools and was employed as a florist for several area flower shops.
He is survived by his mother, Laura Arvin of Knox, sisters: Penny Singleton of Knox, Shannon (Eric) Martin of LA Porte, Kim (Tyler) South of Florida, Cathy (George) Watson of Florida, Jody Lewonas of Florida; brothers: J.R. (Leslie) Francis of La Porte, James Hutchinson of Florida, and Wes (Nora) Francis of Virginia; and many nieces and nephews.
He was preceded in death by his father: Glen Hutchinson; and step-fathers: Kenneth Arvin and John Korp II.
Memorial services will be held on Saturday March 31, 2018 at 11:00 A.M. at the Shiloh Wesleyan Church, 10532 4B Road, Plymouth.