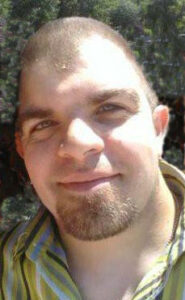 Darek A. Long, 31, formerly of Plymouth, passed away suddenly at 2:47 p.m. on Tuesday, July 22, 2014 in St. Lukes Hospital, Cedar Rapids, Iowa. He has been a resident of Strawberry Point, Iowa for the past two years.
Born in South Bend, Indiana on February 8, 1983, Darek was the son of James A. Long and Martha E. (Schoberg) Conley. Darek received his education at Plymouth High School with the Class of 2001 He made wiring testers with the Commercial Vehicle Group in Edgewood, Iowa serving the Caterpillar Corp.
On March 21, 2009 at the Liberty Church in Menomonie, Wisconsin he married the former Kelie Jo Yoder.
Darek’s passion was his family and serving the Lord. He found his true Faith working with the Youth Ministry at Plymouth Sunrise Chapel. In Iowa he was a member of Cornerstone Church in Manchester. He and his wife Kelie have traveled the world on mission trips as he was involved with ZJam Christian Radio.
There was no adventure too great for Darek. He enjoyed zip lining, sky-diving and meeting people. Darek had a comic nature about himself that made others feel comfortable around him and was an expert on movie trivia. He lived a life to be celebrated.
Surviving is his wife, Kelie of Strawberry Point, Iowa, his mother and step-father Martha and Patrick Conley of Plymouth, his sister Jami E. Holm of Plymouth, his brothers Nicholos J. and Lauren Long of North Charleston, South Carolina and Addam D. Long of Port Clinton, Ohio, his paternal grandparents Mary E. and David Read of Warsaw, his mother-in-law Lori Yoder of Strawberry Point, Iowa and several nieces, nephews, aunts and uncles, cousins and friends. Darek was preceded in death by his father, his step-father Timothy Crowel, his father-in-law Rod J. Yoder, paternal grandfather Arthur J. Long and maternal grandparents Donald G. and Minerva Schoberg. Family and friends will gather at the Johnson-Danielson Funeral Home, 1100 N. Michigan St., Plymouth on Saturday, July 26, 2014 from 1-5 p.m. EDT. Funeral services will be held in the funeral home following the visitation at 5 p.m. EDT officiated by Rev. Dennis Wenzel, pastor of Immanuel Lutheran Church, Donaldson.
A private family burial service will be held at a later time in the New Oakhill Cemetery.
Preferred memorial gifts may be made to the Darek A. Long Scholarship Fund c/o Beacon Credit Union, 855 N. Oak Road, Plymouth, IN 46563 or at the funeral home.