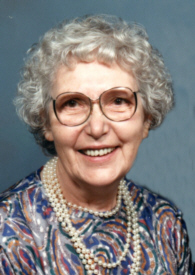 Darlene R. “Kaye”, 92, formerly of Pennsylvania Street and a Plymouth resident most of her life, passed away Sunday afternoon at 3:00 p.m. on April 12, 2015 at Pilgrim Manor Nursing Home, Plymouth.
Kaye was born in Leavenworth, Kansas on February 15, 1923 to Rolland and Bessie (Vyskocil) Kinch. She attended the Plymouth School systems.
On August 31, 1946 Kaye became the bride of Lester L. Capron. He would precede her in death on May 30, 1998.
Kaye worked as a nursing assistant at the Parkview Hospital in Plymouth for 3 years until 1972. She was a past active member of the Marshall County Mental Health and Marshall County Hospice for 27 years, and a volunteer for many other efforts.
Both Lester and she were members of the North Salem Church of God in Plymouth for over 40 years. She enjoyed quilting and times spent with her family.
She is survived by her daughter, Margaret “Peggy” (Dana Shaulis) Smith of Perry, MI and her children, Eric (Tamera) and Jeremy (Dee) Smith, both of Eaton Rapids, MI; grandchildren Andrea (Robert) Conrad and Brenda (James) Kennedy, both of Ft. Wayne; son-in-law, Jim Ammons of Ft. Wayne, and seven great-grandchildren: Bradley Fletcher, Knickolas Fletcher, Jacob Brumfield, Ethan Smith, Lily Smith, Talia Smith and Jimmy Ammons.
Kaye was preceded in death by her husband, Lester; parents; daughters, Rebecca Ammons and Sharon Kinch; and siblings: John and David Kinch and Judith Barrs.
Visitation will be from 10 a.m.- noon on Friday, April 17, 2015 in the Johnson-Danielson Funeral Home, 1100 N. Michigan Street, Plymouth, IN 46563. Funeral services will immediately follow at noon in the funeral home with Pastor Bob Collier officiating.
Graveside services will be at 1 p.m. on Friday, April 24, 2015 in the Oakhill Cemetery, Plymouth.
Memorial contributions can be made to the North Salem Church of God 13263 4th Rd, Plymouth, IN 46563 or Harbor Light Hospice 1608 E. Day Road, Mishawaka, IN 46545.