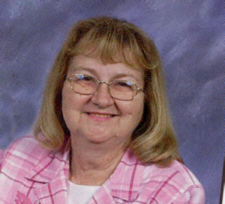 Darlene Marie Willis, 69 a resident of Plymouth, died at 9:51 p.m. Tuesday, March 17, 2009 in Florida Hospital Zephyrhills, Zephyrhills, Florida.
Darlene was born on November 12, 1939 in Hammond, the daughter of Roy E. and Nola M. Patterson Thorne.
In loving memory of a wife, mother, sister, daughter, aunt and grandmother…
It is not often enough you find a person who so willingly gives of themselves. A person who puts others needs in front of her own without exception. Who encourages personal growth and is first to let them know how proud she is of their successes. Who is always there to comfort when needed. Whose love and devotion to her family has no limits. Her strength and poise touched our hearts. A birthday, anniversary or holiday was never forgotten. She gave a smile as often as most exhale. If we had one last wish, it would be that every person on this planet had the chance to spend the same amount of time we had with her. I write this in loving memory of our perfect wife, mother, sister, daughter, aunt and grandmother… She is survived by her husband, Milton R. Willis, Jr., a daughter and son-in-law, Dawn M. and Scott L. Newman, a son, Rick D. Willis, granddaughters; Ashley and Nicole Newman, Kierston Woods, and Kierra Willis, and a grandson, Kiegan Willis.
Also surviving are her mother, Nola M. Thorne, a sister, Diane Simmons; uncle: Arthur Bevan, Sr.; aunt and uncle Jimmy and Betty Kemp; cousins; Peggy and Clyde Rector; Arthur (Chip) and Jeri Bevan, Jr.; nephew and niece Chris and Sherry Simmons and sister-in-laws Luane DiNova and Charlotte Melton.
Darlene was preceded in death by her father.
Friends are invited to share their memories of Darlene with her family at the Johnson – Danielson Funeral Home, 1100 N. Michigan St., Plymouth, from 12 to 2 p.m. Sunday, March 22, 2009.
Funeral services for Darlene will be held at 2 p.m. Sunday, March 22, 2009 at 2 p.m., in the funeral home.
Burial will be in the New Oakhill Cemetery, Plymouth.
In Memory of Darlene please let someone know how special they are and how proud you are of them.