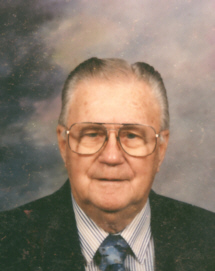 Darrel C. Harmon, 85, 600 W. Oakhill Avenue, Plymouth, died of natural causes at Miller’s Merry Manor, Plymouth, on Saturday, October 28, 2006.
Darrel was born in Rensselaer, Indiana, on August 20, 1921, the son of Curtis and Lucy Alberts Harmon. He had lived in Plymouth since 1953.
He graduated from Remington High School and served over three years in the Army Air Corps during World War II. He loved to fly. During the War, he flew in 35 missions.
He was honorably discharged as a Corporal in November of 1945 in Roswell, New Mexico.
After he was discharged from the Army, he worked as a mechanic, He was a member of the Plymouth Wesleyan Church and the Culver Eagles Lodge.
Darrel is survived by three daughters and two sons.
His daughters are Cheryl and John Lafferty, Columbus, Ohio; Debbie and Roddy Shock, Prudenville, Michigan, and Daryla Monesmith, Warsaw, Indiana.
His sons are Douglas and Vicky Harmon, Plymouth, Indiana, and Gregory and Carol Harmon, White Bluff, Tennessee.
Eighteen grandchildren and 29 great-grandchildren, also survive together with two sisters: Myrna Hudson, Lafayette, Indiana, and Evelyn Bult, South Carolina, and a brother, Donald Harmon, Goodland, Indiana.
Darrel was preceded in death by his parents, two sisters: Arlene Harmon and Margie Simons and two brothers, Carl and Lloyd Harmon.
Friends are invited to celebrate the life and share the memories of Darrel Harmon with his family.
Visitation in the Johnson-Danielson Funeral Home, 1100 N. Michigan St., Plymouth, will be held on Tuesday, October 31, 2006 from 4 to 8 p.m. and Wednesday, November 1, 2006, from 7 a.m. until services in the funeral home at 11 a.m.
The Rev. John Branch, of the Plymouth Wesleyan Church will officiate.
Military graveside services provided by the Plymouth American Legion Post 27 and the Plymouth V.F. W. Post 1162, will be held in New Oakhill Cemetery, Plymouth, Ind.
Memorials in Darrel’s name may be made to the American Legion Post 27 or the VFW Post 1162.