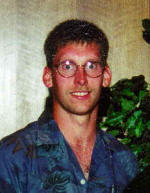 David Alan Mahler, 33, died, following an illness, at 11:32 a.m. on Wednesday, April 17, 2002 , in the loving presence of his family, at home, 19022 Queen Road , Culver , Ind. He was a lifetime Culver resident. David was born in Plymouth on May 31, 1968. He was born the son of Alan M. and Marlene K. Morrison Mahler. He graduated from Culver Jr./ Sr. High School with the class of 1986 and attended Blackhawk College in Kewanee , Ill. On Jan. 3, 1987 , David and Pamela Kay Birchmeier were married in Plymouth . He worked as a hog buyer for Morrison Livestock for 13 years and, since 1999, as a carpenter with Bennett’s General Contracting Co. in Culver. Since he was a young boy, David showed cattle for the 4-H Club and participated in the National 4-H shows. He enjoyed his children’s 4H activities, hunting and car shows of all kinds, especially the vintage variety. A 4-H leader for 14 years, David, was a member of Culver Young Farmers, the Maxinkuckee I.O.O.F. Lodge #373, and a lifetime member of the American Angus Association. He was of the Methodist faith. David is survived by his wife, Pamela, and their two daughters: Ashley Ann, 14, a freshman at Culver Jr./Sr. High and Makaela Kay, 7, a first grader at Culver Elementary. His mother, Marlene Mahler, Culver, and his father, Alan M. Mahler, also of Culver, survive as well, together with a brother, Chad Raymon Mahler, of Yorkville , Ill. , and his fiancée, Natalie McGrew. David’s maternal grandparents, Raymond and Esther Morrison, Culver, Leota Dickey, maternal great-grandmother and James Martin Mahler, paternal grandfather and his wife, Linda, also survive. Several aunts, uncles, nieces, nephews and cousins survive, together with Pattie Birchmeier, David’s mother-in-law, of Plymouth . He was preceded in death by his paternal grandmother, Ruth Mahler and his father-in-law, Richard Birchmeier. Visitation will be Friday, April 19, 2002 , from 3 to 8 p.m. in the Johnson-Danielson Funeral Home, 1100 N. Michigan St. , Plymouth . The Maxinkuckee I.O.O.F. Lodge will provide a memorial service at 8 p.m. Friday in the funeral home. David’s funeral services will be in the funeral home on Saturday, April 20, 2002, at 2:30 p.m. The Rev. Sam Boys will officiate. Burial will be in the Maxinkuckee I.O.O.F. Cemetery , Culver, Ind. Memorial gifts in David’s memory may be made to the Marshall County 4-H Club and to the Marshall County Hospice.