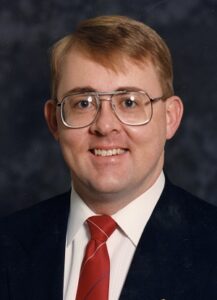 Born in Plymouth on October 21, 1962, David was the son of Robert “Bob” A. Price and Marcia E. (Anders) Price. He graduated from Plymouth High School we the class of 1981. He would go on to attend Purdue University and graduate a B.S. in Aviation Technology, consisting of Maintenance and Flight Options.

He served in the U.S. Air Force until his Honorable Discharge. David then served as a civilian mechanic at several bases which included: Kansas, Iraq, Kuwait and Afghanistan. Also in his duties, he worked with scheduling flight operations, developing training manuals, organized the Hazardous Materials programs, and ran the toolroom.

David was the smartest, most helpful person one could have wanted. He liked to pass on his knowledge to others and there was never a subject that he did not know something about. David would always dig out every ounce of information on a subject, whether it was airplanes or the Bible. He was a great, and annoying, big brother to his sister, Karen. Even though they didn’t always have the same interests, he always sent her all kinds of jokes or articles about her favorite subjects.

He was very involved in Scouts, as an Eagle Scout Leader and a Boy Scout Leader. David served on the council of the Order of the Arrow and was the assistant camp director at Scout camp. He also enjoyed shooting and tackling politics and debates.

David is survived by his father, Bob (Merry) Price of Plymouth; his sister, Karen Gilbert and her son Joseph; stepbrother Col. Michael (Angela) Crane and their son Ace of Austin, TX; uncle, Donald (Beverly) Price of Plymouth and several aunts, uncles and cousins.

A graveside service will be held on Thursday, June 3, 2021 at 1:00pm in the New Oak Hill Cemetery, Plymouth.

In Lieu of flowers, memorial contributions can be made to the Marcia Price Art Fund, a yearly award given out by the Heartland Artists, through the Marshall County Foundation P.O. Box 716, Plymouth, IN 46563.