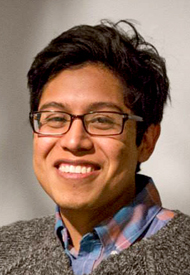 David Cuatlacuatl, 27, a resident of Toledo, Ohio, he was formerly of Plymouth.
David passed away in Napoleon Township, Ohio in a auto accident on Thursday, August 31, 2017. He was born in Cholula, Puebla, Mexico on October 20, 1989, the son of Angela Telez and Jesus Cuatlacuatl. David grew up in Plymouth, Indiana since December 1999. He graduated from Plymouth High School in 2007 and then studied Graphic Design and graduated from Ball State University in 2011, with a Bachelor in Fine Arts. David went on to receive a Master of Fine Arts from Pennsylvania State University in 2015. He was a dedicated artist with an active record of exhibitions, on-going body of works on panels, and a full time Arts Coordinator at the Sofia Quintero Art and Cultural Center. His immense dedication to the arts led him to co-founder and co-director of the international Rasquache Artist Residency in Puebla, Mexico on June 2016. “ABOUT
b. in Mexico 1989
lives and works in the U.S.
loves tacos al pastor and atole de Calabaza
wanted to be a box fighter when younger” – David’s biography in personal website. â€œI approach painting like life, there are many options, plenty of mistakes perhaps, which are necessary I believe. Some I try to fix or cover up and some are left revealed. Others I try to balance. Some things I hate but are left as they are needed for some purpose outside of my understanding so far.â€
David is survived by his parents, a brother Federico Cuatlacuatl and a sister Jessika Cuatlacuatl both of Plymouth.
Visitation will be held in his home parish church of St. Michael on Thursday, September 7th from 5 â€“ 7 p.m. located at 613 N. Center Street in Plymouth. Mass of Christian Burial will immediately follow at 7 p.m. with Fr. John Korcsmar C.S.C.
Burial is being planned in Coapan, Cholula, Puebla Mexico at a later date.