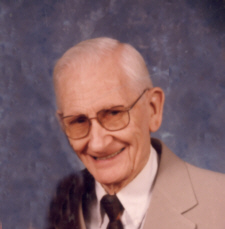 Marshall County resident, David Earl Joseph, 91, of 12747 Peach Road, Plymouth, died of natural causes in the Hospice House of Elkhart on Tuesday, September 8, 2009.
Born in Culver, Indiana, on July 20, 1918, David was the son of Clyde and Dorothy Bolen Joseph.
In 1940, David married Opal Holderead, she preceded him in death on April 21, 1979.
David worked for NIPSCO as a meter reader, retiring in 1983. On February 29, 1983, in Logansport, David and his wife Gertrude Smith were married.
He enjoyed traveling and spending time with his family.
David is survived by his wife, three daughters and a son and two step-sons. His daughters are Christina Morlock, Plymouth: Rebecca (Jim) Fiely and Marsha (Joe) Gibbs, both of Logansport; his son is Phillip (Brenda) Joseph of Idaho and his step-sons are Richard (Joyce) Smith of Arkansas and David (Linda) Smith of Loogootee, Indiana.
Twenty grandchildren, Twenty-three great-grandchildren and five great-great-grandchildren survive as well.
David was preceded in death by his parents, a grandson, a son-in-law, John Morlock and a step-son, Bob Smith.
Friends are invited to celebrate the life of David Joseph from 2 to 6 p.m. on Sunday, September 13, 2009, and one hour prior to the services on Monday, September 14th, in the Johnson-Danielson Funeral Home, 1100 N. Michigan St., Plymouth.
Funeral services for David will be held in the funeral home on Monday, September 14, 2009 at 11:00 a.m. The Rev. Glen Mitchell will officiate
Burial will be in Mount Hope Cemetery, Logansport, Indiana at 2:00 pm on Monday, September 14, 2009
Memorial gifts in David’s name may be given to a Charity of the Donor’s choice.