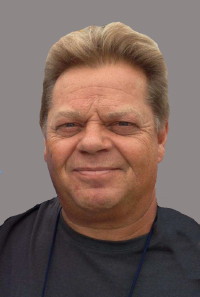 David â€œDaveâ€ L. Harrell, 55, passed away with beloved family and adored friends by his bedside, after a brief battle with cancer, on Monday, August 12, 2019 at St. Joseph Regional Medical Center- Plymouth Campus.
Born in Warsaw, Indiana on May 3, 1964, Dave was the son of Connie (Schooley) and Terry Harrell. He graduated from Plymouth High School with the class of 1982 and continued on to attend Lincoln Technical Institute in Indianapolis.
In the former Sunrise Chapel in Plymouth, Dave married Darlene â€œDarâ€ J. Scarborough on August 22, 1987. And to this marriage came two children: Shelby and Noah.
Most recently, Dave worked for INDOT as a highway technician having made yet another new family. Dave had a heart that could rival the size and depth of the Grand Canyon. He opened his arms and his home to those who sought acceptance in a safe place. Though he greatly valued spending time with friends over morning cups of coffee and tee times out on the golf course, Dave received the most pleasure from spending precious time with his beloved family. Sun-soaked days filled with lounging in the backyard pool, quiet fireside evenings in which everyoneâ€™s nose is buried inside a book, and sharing the large bucket of movie theatre popcorn among the four of them as they watch that monthâ€™s big releases on the big screen were among his favorite ways of sharing these moments. Family for Dave, however, extends past the nuclear household. His family gradually increased in size as he â€œadoptedâ€ and served as a secondary father-figure to his childrenâ€™s ever increasing group of friends. Before the annual Labor Day fireworks, the aroma of freshly smoked meat filled the driveway as he filled the plates of friends and family with juicy, decadent racks of ribs. Having received his private pilotâ€™s license, Dave thoroughly enjoyed flying as well as fishing, boating and restoring his 1975 Camaro. Dave created an extension of his family on the shores of Lake Maxinkuckee when he became the go-to guy for the Culver Distance Camp. He is survived by his loving wife, Darlene, and their children: Shelby and Noah, all of Plymouth; his parents, Connie and Terry Harrell of Plymouth; siblings: Tina (Steve) Shafer of Tecumseh, MI, Lisa (Mike) Ottow of Plymouth and Steve (Julie) Harrell of Plymouth; many nieces and nephews; his mother-in-law, Nita Scarborough.
He was preceded in death by his father-in-law, Robert Scarborough.
â€œDad you will always be my hero.â€ – Love, Shelby
Visitation will be held on Friday August 16, 2019 from 4-8 p.m. at the Plymouth Wesleyan Church, 11204 Michigan Street, Plymouth.
Funeral services will be held on Saturday, August 17, 2019 at 11 a.m. in the Plymouth Wesleyan Church with Pastor Steve Cox officiating. Visitation will resume one hour prior in the church.
Burial will be in the New Oak Hill Cemetery, Plymouth.
Memorial contributions can be made to the family for a future scholarship fund to be created in Daveâ€™s name, or to the Cornerstone Community Fellowship, 1375 Maple Road, LaPaz, IN 46537.