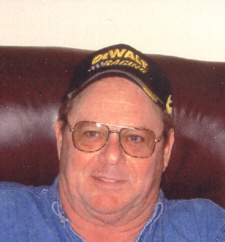 David L. “Dave” Holland, 64, a lifetime Plymouth resident, died after a short battle with cancer in Saint Joseph Regional Medical Center, Plymouth, at 2:02 a.m. on Wednesday, April 4, 2007.
Born in Plymouth on May 8, 1942, Dave was the son of Eldon “Dutch” and Mary Jane (Albert) Holland.
He graduated in 1961, with the first graduating class of the new Plymouth High School.
On November 4, 1961, in St. Thomas’ Episcopal Church, Dave and Sandra Vinall were married.
A General Contractor, licensed plumber and electrician, Dave retired from construction in 2004.
An outdoorsman, he loved fishing and gardening and enjoyed housekeeping. He won the Plymouth Pride Award for his beautiful yard and landscaping. NASCAR racing and Mark Martin were his favorites. Dave is survived by his wife, Sandra, and by their three daughters: Lori (Mike) Faylor, Culver, Indiana: Lisa (Roger) Drown, Urbandale, Iowa, and Leah ( Sean) Kellenberger, Edina, Minnesota.
Thirteen grandchildren also survive. They are: Lori and Mike Faylor’s children, Alicia Henely, Michael Faylor, Jr.: Aaron (Jessica) Gilley; and Zachery Faylor. Also, Lisa and Roger’s children, Jessica, Alicia, Ethan and Lainey Drown: and Haley, Griffin and Ian Kellenberger, children of Leah and Sean.
Andrew Whitaker and David Holland, sons of the late Bill Holland, survive as well, together with two great-granddaughters, Olivia and Gwendylan Gilley.
Also surviving are his mother, Mary Holland and two sisters and a brother. They are Kathy Holland, Highland, Indiana, Jan (Bill) Berger, Valparaiso, Indiana; Greg (Ann) Holland, Grovertown, Indiana.
Dave’s mother-in-law, Mary Vinall, sister-in-law, Pam (Jay) Wakeland and brother-in-law, Jim (Judy) Vinall, along with several nieces and nephews, also survive.
Dave was preceded in death by his father and a son, William Holland.
Friends are invited to share memories with Dave’s family on Saturday, April 7, 2007, at the Johnson-Danielson Funeral Home, 1100 N. Michigan Street, Plymouth, from 1 to 4 p.m.
Funeral services for Dave will follow visitation at 4 p.m. on Saturday.
Josh Wakeland, a nephew of Dave’s, will officiate.
Burial will be at a later date in New Oakhill Cemetery, Plymouth, Indiana.
Memorial gifts in Dave’s memory may be made to the American Cancer Society, Marshall County Chapter.