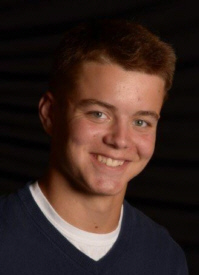 David Michael Bacon, 17, passed away into the arms of Jesus Christ on Sunday evening, September 20, 2015.
David was born in Plymouth, Indiana on May 26, 1998 to David M. and Kathy A. (Szombathy) Bacon. He was a junior at Plymouth High School in Plymouth.
Four things were important to David: family, faith, his education and sports. He was a great big brother to his younger sister and brother. He was always there for them, whether it be for homework help, teasing or athletics. He always tried to “Lead….for God’s sake”, a bracelet he wore always and always knew that “God is good all the time”. He was a regular attendee of Plymouth Wesleyan Church with his family and had accepted Christ into his life. David always talked positively about his faith.
David also excelled in school, as well as just about anything else he tried. He was a member of the National Honor Society, Student Council and the Student Athletic Council. He focused a lot of his attention on his grades in the hopes of playing college football. He was tossing around Universities such as: Butler, West Point, Purdue and Valparaiso.
David loved being a Plymouth Rockie, playing football, baseball and basketball. He played as pitcher and outfielder in baseball. In football, David #23 played as defensive safety and back-up quarter back. He was also leading his team this year in top tackles.
He also enjoyed golfing with his football and baseball teammates and coaches. He taught himself to play the piano by ear, a gift given to him by his mother. He enjoyed lifting weights and having competitions with his father in their basement gym. He enjoyed fishing, and had many friends anywhere he went. David will be forever remembered by his parents, David and Kathy, and his younger sister and brother, Elizabeth Ann and Daniel Lewis, all of Plymouth; his maternal grandparents, Daniel and Beverly Szombathy of Grovertown; his paternal grandparents, David and Charlayne Bacon of Plymouth; his aunt, Kim and Phil Scott and their children, Myles, Mitchell and Meghan; his aunt, Victoria and Don Hill and their children, Andrew and Sarah; and uncle, Daniel and Janice Szombathy and their children Abigail, Daniel and Stephen.
Visitation will be from 4-7 p.m. on Thursday, September 24, 2015 in the Plymouth Wesleyan Church, 11203 Michigan Road, Plymouth, IN 46563. Funeral services will begin at 7 p.m. in the church with Pastor Oliver Dongell and his uncle Pastor Daniel Szombathy officiating. The Johnson-Danielson Funeral Home in Plymouth is assisting the family with the arrangements.
Memorial contributions can be made to the Plymouth Wesleyan Church or to the Plymouth High School Football and Baseball Athletics, #1 Big Red Drive, Plymouth, IN 46563.