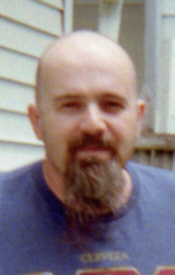 David R. Snyder, 42, passed away surrounded by his loving family after a 16-month battle with glioblastoma on Sunday, September 21, 2014 at 10:35 a.m.
Born in Seaside, California on March 6, 1972 David was the son of Melvin Snyder and Rosemary K. (Seibert) Spalty. David lived in the Monterey, California area since birth before his family moved to Plymouth when he was 16 years old. David graduated from Knox High School with the class of 1991.
Shortly after graduation, David married Trisha A. Wessell on December 13, 1991 in Plymouth. To this union, two children were born, Cody and Hayley.
David worked for Hoosier tire as a material handler for over 16 years, until he had to leave due to his illness.
A loving husband and father, David loved being with his family and cooking for them. A memorable trip for the family was going to Las Vegas two years in a row in 2006 and 2007. He was also a NASCAR fan.
David is survived by his wife, Trisha and their two children, Cody and Hayley, all of Plymouth; his mother, Rosemary Spalty of Hanover, CA; his siblings: Melvin (Julie) Snyder of Plymouth, Mary (Ira) Lockshin of Palmdale, CA, Theresa Lauderdale of Prunedale, CA and Andrew (Casey) Snyder of South Bend, IN; his father and mother-in-law, Larry (Linda) Wessell of Plymouth; and his brother-in-law, Jack Wessell of Kouts, IN
He was preceded in death by his father, Melvin.
Visitation will be from 4 – 7 p.m. on Wednesday, September 24, 2014 in the Johnson-Danielson Funeral Home, 1100 N. Michigan Street, Plymouth. Funeral services will immediately follow in the funeral home at 7:00 p.m.
Memorial contributions can be made to the family.