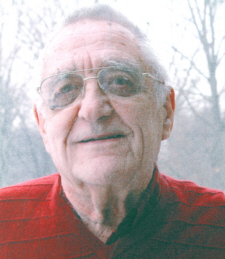 Dean Gridley, 88, 805 Baker St., died of natural causes in Pilgrim Manor Nursing Home, on Friday, November 6, 2009.
Born in West Chicago Illinois, on October 8, 1921, Dean was the son of Floyd and Florence W. Dean Gridley
He graduated from West Chicago Schools in 1940.
In World War II, Dean served his country in the military in the Army Air Corps.
On November 4, 1972, in Plymouth, Dean and Mary E. Beam were married. Dean worked for the Del Monte Corp. for 23 years, retiring in 1985.
Dean enjoyed camping and traveling and had visited Italy and Ireland. He was a stamp collector and had fun making and running model trains.
Dean is survived by his spouse and three sons: Bruce E. (Roseanne) Gridley, South Carolina: Dr. Barry L.( Joanne) Gridley, Ohio, and Glenn Gridley, Plymouth.
Three step sons also survive. They are: Steven D. ( Carol) Beam, Walkerton, Michael B. ( Janet) Beam, Plymouth and Daniel D. ( Jeanne) Beam, Warsaw.
A brother, Robert Conklin, Youngstown, Ohio, survives as well.
He is also survived by 6 grandchildren, 7 step grandchildren and 17 step great grandchildren.
Friends are invited to share memories with the family on Tuesday, 10, 2009, from 12 to 2 p.m. at the Johnson-Danielson Funeral Home, 1100 N. Michigan St., Plymouth, IN. Funeral services will be held at 2 p.m. in the funeral home. The Rev. Dr. Ron Liechty and the Rev. Robin Keating, pastor of the First United Church of Christ where Dean was a member, will officiate.
A full military graveside service at the New Oakhill Cemetery will be accorded to Dean by the American Legion Post 27 and the VFW #1162.
Memorials in Dean’s memory may be made to the First United Church of Christ, 321 North Center Street Plymouth, Indiana