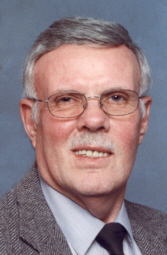 Dean Kinney at the age of 72, walked into the arms of his Savior at 11:18 a.m. on Thursday, June 3, 2010. As he had wished, Dean was able to return to the comfortable surroundings of the family’s Olive Trail home and with his entire immediate family at his side, they were led in prayer and song by his friend and pastor Paul Whitworth.
He was born Kenneth Dean Kinney the fourth child of Clyde K. and Mabel H. (Cornwell) Kinney’s family of twelve. Dean was raised in an active household and at the age of eight began his working career by delivering milk to area neighbors and never looked back. Over time he became the youngest site manager for UPS and recorded many years with Plymouth’s McCord Corporation.
Dean was a graduate of Knox High School.
On December 19, 1954 in Knox he took the former Ruth H. VanVactor as his bride. Together over the next 55 years they raised two sons, Alan and Greg and two daughters, Eileen and Jane. They were able to spend time traveling which included motorcycle trips to Nashville Tennessee, where they enjoyed visiting the Grand Ole Opry.
Spiritual growth was a big part of their lives and they became charter members of the Faith Baptist Church in 1980 where Dean served as a trustee and led congregational hymns.
As a member of the Plymouth Lions Club, he experienced trips to Mexico helping teams of Doctors restore sight to remote villagers, allowing him the opportunity to give back to others in need.
His retirement was no signal to slow down. He truly enjoyed working in his yard, gardening and creating things in his wood shop. Dean was also committed to remaining physically fit and often road his bicycle into town for walks in the cemetery and park with his beloved little buddy “Tinker” a Chihuahua.
Survivors include his wife Ruth, children, J. Eileen (Ron) Nelson of Elizabethtown; Kentucky, Alan D. (Dawn) Kinney of Plymouth; Jane E. (Ray) Barnette of Nashville, Tennessee and J. Greg (Paula) Kinney of Plymouth along with 10 grandchildren and 17 great-grandchildren.
His surviving siblings are: Norma Keto of Frankfort, IL; Marjorie Kinney of North Highland, CA; Kathryn Patrick of Michigan City, IN; Rita (Steven) Bolinski of Jacksonville, FL; Carol (Jim) Patrick of Plymouth; Virginia Sinn of Koontz Lake and Dale (Zona) Kinney of Knox. Sisters-in-law include, Martha Mann of Elkhart and Margorie Mudge VanVactor of Plymouth along with numerous nieces and nephews.
He was preceded in death by his parents, brothers: Robert and Darwin Kinney, sisters: Darlene Bailey and Sharon Campbell, in-laws: Russell L. and Eva Lena VanVactor and brother-in-law: Harold S. VanVactor.
The family will receive friends on Saturday, June 5th from 4 – 8 p.m. in the Johnson-Danielson Funeral Home, 1100 N. Michigan Street, Plymouth where services will be held on Sunday at 1:30 p.m. with Rev. Paul Whitworth officiating.
Burial will follow in the New Oakhill Cemetery.
Memorial gifts may be made to the Faith Baptist Church or Plymouth Lions Club.