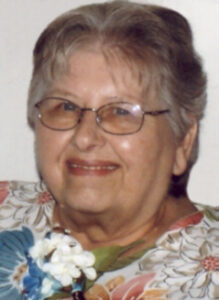 Deborah Jean Emmons, 73, died unexpectedly of natural causes on July 25, 2012 at 10:30 a.m. in Catherine Kasper Life Center, Donaldson.
Deb was born on February 11, 1939 in Gary, Indiana the daughter of James A. and Ruby B. (Howland) Whiteman.
She graduated with the LaPaz High School class of 1957 and went on to graduate from the American School of Floral Design in Chicago.
Nearly 53 years ago Deb took Roger L. Emmons to be her husband on August 9, 1959 at the LaPaz Church of God.
Deb began a long career of food service as an owner/operator in LaPaz at the B&J Drive-In, which had evolved into a restaurant at the busy corner of 6 and 31. She also spent many years at Whiteman’s Greenhouse and finally with D & K Antiques in LaPaz.
Deb enjoyed spending her free time on a bowling league, she enjoyed birds, flower gardening, sharing crocheting and needlework with others, and of course her family and pet dogs. As a member of the LaPaz Fire Department Auxiliary she often cooked and worked with the department during its many community fundraisers, she was always known as a hard worker.
Surviving is her husband Roger, and their five children and their families, they are; a son Roger Emmons Jr. of South Bend, his children Nichole and Peyton; daughter Jodie D. & Jeffery Slough of Plymouth with their children Alyssa, Amanda, and Autumn; son William A. & Andrea Emmons of Bremen with children Heather and Conner; daughter Darla L. & Bobby Adams of Claypool with their children Brennen, Danielle, and Brice; daughter Karla G. & Justin Kaser of South Bend; along with eight great grandchildren. Two brothers James J. & Nancy Whiteman and Thomas H. & Maxine Whiteman both of Plymouth, with several nieces and nephews surviving as well.
Deb was preceded in death by her parents and brothers Robert and Richard “Dick” Whiteman.
A time of sharing with the family will be held on Saturday July 28, 2012 from 2 to 6 p.m. in the Johnson Danielson Funeral Home 1100 N. Michigan Street, Plymouth. Funeral Services officiated by Army National Guard Chaplain Thomas Whiteman Jr., will be held on Sunday July 29, 2012 in the funeral home at 2 p.m.
Burial will follow in New Oakhill Cemetery, Plymouth.
Memorial contributions are preferred to the Union-North Ambulance Service or to the LaPaz Fire Department.