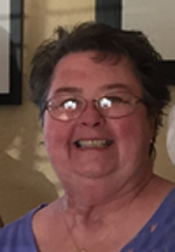 Deborah K. Geasey, 67, of Mishawaka and formerly of Plymouth, died on Thursday, July 19, 2018, after a six-month illness. Debbie was born on June 27, 1951 in Sunbury, PA, the eldest of Samuel and Elizabeth M. (Green) Geaseyâ€™s three daughters. The Geaseys moved to Mishawaka when Debbie was a toddler, then eventually to Plymouth, IN, where she graduated from Plymouth High School.
While still in high school, Debbie began working for The Pilot-News while it was still under the ownership of the Boys family. She was the first face everyone saw when they walked in the door. Her official job was receptionist/classified ad intake person, but she did everything from proofreading to setting ads, and even proudly once wrote a concert review.
Debbie remained at the Pilot until the late 1990s, when she went to work for Crane Industrial Service Co., Granger, owned by the Minixes, her second family, and was a valued employee for 20 years. She also worked for many years at Dorothyâ€™s Hallmark in Plymouth, mainly to support her greeting card habit. She always had the proper card for the proper occasion.
An avid Notre Dame fan, she also loved the Chicago Cubs and watching figure skating. Debbie enjoyed working crossword puzzles and absolutely loved her police procedurals â€“ Law & Order, Monk, all the CSIs. She also enjoyed antiquing and going to craft shows. Debbie was a member of First United Methodist Church in Mishawaka.
Debbie is survived by her sister, Pam Hunsaker, of Beaumont, TX; two nephews, Jade Hunsaker of Indiana and Kalin Hunsaker of Greencastle, IN; great-nephews Raynen Hunsaker of Mishawaka, Daemon Hunsaker and Evan Hunsaker, both of Plymouth, IN; a great-niece, Lorena, of Indiana; a great-great nephew, Mason, of Mishawaka; as well as an aunt, Joyce Zucker, of Leesburg, Virginia, and her brother-in-law, Salvador (Chava) Baca, of Plymouth. She was preceded in death by her parents and her sister, Candace Baca. She also leaves behind a group of friends who were her family as well: Linda (Minix) Bergan and â€œthe boysâ€ Jerry and Terry Minix, her honorary big brothers (and the whole Minix family); Bonnie Wright; Debby Applegate; and Beverly Hupp. She is also survived by her beloved cat, Taffy.
Per Debbieâ€™s request, there will be no service or visitation. Johnson-Danielson Funeral Home in Plymouth is in charge of arrangements.
Memorial contributions may be made to Michiana Five for the Homeless, St. Margaretâ€™s House or Heartland Small Animal Rescue.