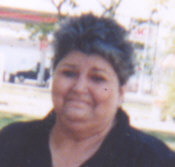 Deborah L. “Debbie” Johnson, of 209 Maryland St., North Judson, Ind., died at 2:18 am on Monday, September 6, 2004. Debbie, 48, died at her residence under the loving care of her family and hospice.
Born on April 28, 1956 in Knox, Ind., Debbie was the daughter of Bill Miller, Sr. and Lounette Clark Back.
After receiving her G.E.D., she received an Associates Degree from Ancilla College, Donaldson, Indiana.
Debbie was a homemaker who enjoyed going to the boat, playing bingo, and the precious time she spent with her children and grandchildren.
She is a member of MADD.
Debbie is survived by three daughters: Stephany (Jacob) Casteel and their children, Shelby and Jacob of Plymouth; Crystal Johnson and her son Stone of Plymouth and Misti Johnson of North Judson, and two step-sons: Jim “Jimmy” (Kris) Johnson and their children, Amber, Sara, Kylie, Taylor, Trey, and Ashley of Plymouth and Shane (Amanda) Johnson and their children, MacKenzie and Adrian, of Plymouth.
Also surviving are her step-father, Manford K. Back, Sr. of Plymouth, a sister: Janet (Bob) Edwards of North Judson, a step-sister: Valerie Back of Plymouth; and five brothers: Bill (Penny) Miller, Roger (Nikki) Miller, Owen Miller, all of Knox; Freddy Miller of California and Wayne Miller of Kentucky.
She was preceded in death by her father, Bill Miller, Sr, her mother Lounette Back, her step-brother, Manford “Kash” Back, Jr., Misti’s daughter, Cheyanna Jackson, and a nephew Jarrod Edwards.
Friends may visit with Debbie’s family from 4 to 8 pm on Thursday, September, 9. 2004 at Johnson – Danielson Funeral Home, 1100 N. Michigan St., Plymouth.
Funeral services for Debbie will be at 11:00 am on Friday, September 10, 2004, in the funeral home. Pastor Jim Pippenger will officiate.
Entombment will be in the Bremen Cemetery Mausoleum, Bremen, Ind.
Memorial contributions in Debbie’s name may be made to MADD.