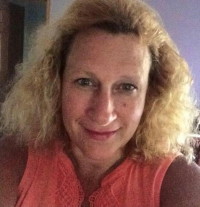 Debra Sue (Justis) Adams, 56, passed away peacefully in the presence of her family at 12:30 p.m on Saturday, April 18, 2020 at The Center for Hospice Care in Roseland, Indiana. A Celebration of Life will be held on Saturday, July 11, 2020 from 1-3 p.m. in the Johnson-Danielson Funeral Home, 1100 N. Michigan Street. Services will follow led by the family. Debra was born in East Chicago, Indiana on March 21, 1964 to Abram Leon and Judith (Griffin) Justis. Her family moved to Monterey, Indiana in 1975, where she would graduate from Culver High School in 1982. After high school she married Todd Welling, and she would welcome her first child. Debra would later move to Bremen, where she would meet and marry James Adams on November 18, 1995. Together they raised 3 wonderful children and many pets. Debra would start her accounting career at Pirod/Valmont in Plymouth in 2000. Later she would make the transition to Zimmer Biomet in 2011 as lead accounts payable, where she acquired many friends. Debra loved her career and worked up until her last days. You could always find Debra mowing her lawn or doing other yard work, even after completing the last Chemotherapy session for the day. She loved her animals, especially her dogs, as well as, trips to Las Vegas, Cedar Point, Colorado & North Carolina. But her true passion was spending time with her children and grandchildren.
On February 28, 2019, Debra was diagnosed with Acute Myeloid Leukemia. Throughout her battle with cancer she remained brave, strong and fearless. She always had a smile on her face and gave two thumbs up. She believed that she could handle anything cancer threw her way. Debra lived with cancer for 1 year and 2 months. Debra is survived by her mother Judith Griffin of Franklin, NC; ex-husband and best friend James Adams of Plymouth; daughters, Whitney Michelle Adams (John) and Hollyanna Adams of Plymouth; son James Taylor Alvin Adams of North Judson; grandchildren: Isabella, Jazmaella, Maksimiano and Aislynn Debra Sue; brothers, Jeff (Rhonda) of Culver and Frank (Beate) of Kirchweg Germany; sisters, Missy (Arden) of Rochester and Tammy (Toney) of Franklin NC, along with 5 nieces and 2 nephews.
She was preceded in death by her father Abram Leon Justis, first husband Todd Welling and grandson Roberto Pedraza III.