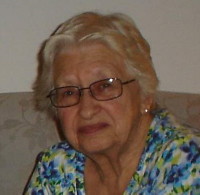 Deirdre Ann Crossgrove, 88, passed away peacefully on Friday, March 27, 2020 at Woodland Manor in Elkhart, Indiana.
She was born August 6, 1931 to Ada Inez Kirkley and William Russell Kaser of Lapaz, Indiana. Deirdre was later adopted by Thomas J. Piper, and was raised by her grandmother Cloie Pratt Carrothers and step-grandfather Floyd E. Carrothers of Burr Oak, Indiana. She lived her entire childhood on farms with them, as well as, her uncle, Wilbia Carrothers, who was more like a brother to her.
Deirdre graduated from Culver High School in 1949. She married William Deane Crossgrove in Culver, Indiana, March 17, 1949. They settled into Kaley’s Cottage (a small seasonal structure), where she was a stay-at-home mom, selling Avon, until their daughter Cynthia was in school. Later in life they moved to Plymouth to be near her mother and step-father. They remained in Plymouth until moving to Osceola, Indiana to be near their only child.
Deirdre moved into the secretarial position in the Law Offices of Huff and Goodrich, and eventually worked solely for Attorney Huff. After Judge Huff’s retirement from his law offices, she worked for the State Exchange Bank of Plymouth and Culver. When her husband Bill’s job ended with Rockwell International’s exiting Knox, Deirdre and Bill started Crossgrove Cleaning Service, and spent the next 10 years until retirement running their small business. “Dee” being multi-talented in knitting, crocheting, embroidering and sewing spent much of her time with projects, once making over 40 Irish scarves for others. She was known for ability of being thrifty. She enjoyed running a household and budgeting.
She is survived by her husband, William; daughter, Cindy (Jimmie) Owens of Osceola; 2 grandsons and great-grandchild.
Deirdre was preceded in death by her parents.
Due to the restrictions on social gatherings, the family will have a private graveside service at the New Oak Hill Cemetery at a later date. Cindy would like to offer a special thanks to Elkhart Place for their tender and vigilant care over the past year, and to Woodland Manor’s staff during the most difficult time of mother’s life.