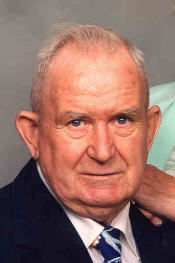 Delbert C. Stutzman, 96, 17796 Vine St., Tyner, a Marshall County resident most of his life, died of natural causes at 7:30 a.m. on Tuesday, April 1, 2003, in Pilgrim Manor.
Delbert was born on August 11, 1906, in Goshen, Ind., the son of David D. and Ida I. Hochstetler Stutzman. One of nine boys and four girls, he grew up on a 140-acre farm near Nappanee and attended Nappanee schools. Raised Amish, speaking low-German, he said, “we went to school to learn how to speak English and to satisfy the law.”
He earned his diploma while he was in the United States Army in W.W.II.
On May 1, 1935, Delbert and Grace E. Cole were married in Plymouth. Together they twice traveled to the Holy Land, where Delbert was baptized in the River Jordon. Grace died on March 8, 1996.
He worked at the Abair Dairy in Plymouth for a time, driving a delivery truck. He was a self-employed farm drainage engineer for over 25 years, retiring in 1971.
Delbert enjoyed fishing in local lakes and in Florida, spending many winters in the Melbourne area. He liked working crossword puzzles and did so without using eye glasses. He drove his own car until he was 95 and lived alone doing all of his own cooking, baking and keeping house.
He was a loyal Chicago Cub’s fan and enjoyed mushroom hunting season.
In excellent health most of his long and productive life, he didn’t take medicines, “except for herbal stuff” his doctor gave him.
He enjoyed fashioning vases out of plastic bottles for the women of his church to sell at their bazaars.
The Blissville Church of the Brethren was a big part of his life and he was a dedicated member for over half-a-century. Up until two years ago, Delbert canned gallons of produce and slabs of beef for himself and for the Blissville Church suppers.
He said he’d been canning food since he was 10 years old. “That’s the Amish way.”
Delbert and Grace had no children. He is survived by a brother, Howard W. “Smokie” and Patty Stutzman, Plymouth, and by three sisters: Barbara M. Swift, Mishawaka, Ind., Alice I. and Delbert Schaetzle, Bourbon, Ind., and Sara A. Stutzman, Plymouth.
A sister-in-law, Gladys Stutzman, Plymouth and numerous nieces and nephews also survive.
Delbert was preceded in death by his parents, his wife of 65 years and by a sister and seven brothers. They are: Alma H. Stutzman; Alvin R., Eli W., Daniel A., Isaac R., Joseph E., Marvin J. and Jonas F. Stutzman.
Visitation and a celebration of Delbert’s life will be from 4 to 7 p.m. on Thursday, April 3, 2003, in the Johnson-Danielson Funeral Home, 1100 N. Michigan St.., Plymouth and for one hour prior to services in the Blissville Church of the Brethren on Friday, April 4, 2003, at 1 p.m.
Pastor Rev. Jimmy Baker and former pastor Rev. Opal E. Nees of North Manchester, Ind., will officiate.
Burial will be in New Oakhill Cemetery, Plymouth.
Memorial gifts in Delbert’s memory may be made to the church.