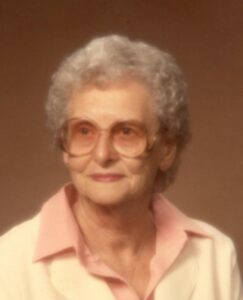 Former Plymouth resident, Della Elizabeth Drake, 88, died following a period of declining health, at 5:30 p.m. Thursday, March 8, 2007 in the Lakeland Regional Medical Center. Her loving family was at her side. For the past two years Della has made her home with her daughter and family in Lakeland, Florida.
Della was born the daughter of Ernest LeRoy and Julia Ann (Shorter) Luse on March 23, 1918 in Camden, Indiana. In 1930 the family moved to Plymouth where she attended school.
On August 14, 1937 in Plymouth, Della married Albertus M. Drake. They would spend the next 68 years together until his death on September 19, 2005. They would have three birth children and extend their home to 27 other children as foster parents.
A person with a genuine interest for others, Della enjoyed meeting people from all walks of life while serving as the guest registration clerk for the Plymouth Motel and then retired in 1976. Della truly enjoyed the company of her family, playing euchre, listening to the Oakridge Boys, watching Court T.V. and collecting various figurines. She liked to cook and was known for her homemade noodles.
In Plymouth, Della had attended the Pretty Lake Trinity United Methodist Church and the Bethany Christian Church in Lakeland.
Surviving is her daughter; Cathy R. and husband Ed Criswell of Lakeland, son; David A. and wife Charlotte of Bonita Springs, Florida along with five granddaughters: Destiny, Brittany and Ashlee Criswell, Stephanie Boomershine and Melissa Miller.
Also surviving are two sisters; Jean Michalski and Patricia A. Sporner of Plymouth and two brothers; Kenneth L. Luse and wife Mary Ann of Plymouth and Wayne A. Luse and wife Viola of Monon, Ind. along with several nieces and nephews.
Proceeding in death was her spouse, an infant daughter; Sharon K. Drake, a sister; Agnes Dixon and an infant brother; Dale Luse
Friends and family will be received at the Johnson-Danielson Funeral Home, 1100 N. Michigan St. Plymouth from 4 – 8 p.m. Tues. March 13, 2007 and continue after 7 a.m. Weds. until time of services at 11 a.m. in the funeral home. The Rev. Charles Krieg of the Salem United Methodist Church, Bremen will officiate. Burial will follow in the New Oakhill Cemetery, Plymouth.
Preferred are memorial gifts in Della’s memory to the Salem United Methodist Church, 302 W. Plymouth St., Bremen, IN 46504 or the Marshall County Cancer Society, 9739 Sunnyside Drive, Plymouth, IN 46563