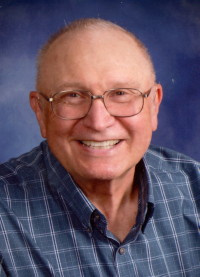 Dennis E. Young, 76, passed away in his home on Wednesday morning, December 12, 2018.
Born in Ft. Wayne, Indiana on April 3, 1942, Dennis was the youngest son of Roy and Blanche (Fordyce) Young. He attended Huntington High School.
Dennis married Sharon A. Hooton Naessens in 1974 and with his military career, the two lived all over the U.S. and in the Philippians.
He proudly served for our country in the U.S. Navy during the Vietnam War and Operations Desert Shield, Desert Storm and Sea Angel. He served for 27 years as a Chief Radioman until his Honorable Discharge in 1991.
Dennis then worked for the U.S. Border Patrol in San Diego, CA and at the Grissom Air Force Base for the DOD Police.
Dennis and Sharon were world travelers and enjoyed seeing new places. He enjoyed reading, Stephen King was his favorite novelist, and was always â€œdoingâ€ stuff on the computer. He loved time spent with his grandchildren and his dogs, Reba and Ruby.
Dennis was a member of Immanuel Lutheran Church in Donaldson, serving as greeters and ushers. He was a member of the VFW in San Diego and the Moose Lodge #702 in Santa Monica, CA.
He is survived by his wife of 44 years, Sharon of Plymouth, and children: Jeffrey Hooton of South Bend, Scott (Patty) Hooton of Ft. Lauderdale, FL, Matthew (Stacy Menzie) Young of Nappanee, Ryan Young of Elkhart and Michelle (Billie) Jackson of Ft. Wayne; 12 grandchildren; sister-in-law, Sally (Robert deceased) Young and many nieces and nephews.
Dennis was preceded in death by his parents, brothers and sisters.
Visitation will be held on Saturday, December 15, 2018 from 11-1 p.m. at the Immanuel Lutheran Church, 6835 Union Road, Donaldson. Funeral services will immediately follow at 1 p.m. in the church with Pastor Thelma Cobbler officiating. Military Honors will be provided following the service by members of the American Legion Post 27, Veterans of Foreign War- Marshall County Post 1162 and Disabled American Veteran Chapter 42.
Memorial contributions can be made to the Immanuel Lutheran Church, 6835 Union Road, Donaldson, IN 46513.