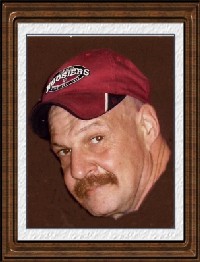 Dennis Ringle died of natural causes from a heart attack at 8:19 p.m. on Monday, February 20, 2006, in Saint Joseph Regional Medical Center, South Bend, Indiana
He was 49-years-old.
The lead guitarist for the popular local band, Floodstage, Dennis was known throughout the area for his musical talent. He self-taught himself the art of the guitar when he was 12-years-old.
His last gig was Saturday evening at Swan Lake at the Boys & Girls Club benefit dinner, where he thrilled the crowd with his masterful music before collapsing on stage.
Dennis was born on December 14, 1956, in Plymouth. He was the son of Wendell Ringle and Pearl Warner Konkle. He attended Plymouth Schools, eventually transferring and graduating from Argos High School in 1975.
In August of 2001, Dennis and Jeanne Davis were married in Plymouth.
He worked for Gulfstream in Nappanee.
He loved his family and friends –his music and all of his animals.
Dennis is survived by his wife, Jeanne, and three step-sons: James Jones, Decatur, Ill., Jason Jones, Plymouth, Ind., and Michael Kloko, Columbia, S.C.
His father, Wendy Ringle and step-mother, Carol Ringle, of Rochester, Ind., also survive together with three brothers and sisters-in-law. They are Elmer and Alice Stiles, Don and Diane Stiles and Rich and Hotsako Stiles, all of Plymouth.
Two sisters survive as well. They are Betty Sarna, Plymouth and Wanda Bassett, Meridan, Conn. Three step-sisters, Rose and John Archambeault, Argos, Ind., Tena Flynn of Rochester, Ind., and Sharon Turner also of Argos, also survive.
There are many nieces, nephews and friends who loved him and will miss him very much.
Dennis was preceded in death by his mother, Pearl Konkle and a step-sister, Donna Treber.
Friends will be welcomed to share their love and memories of Dennis at the Johnson-Danielson Funeral Home, 1100 N. Michigan St., Plymouth, on Saturday, February 25, 2006 from 3 to 7 p.m. Funeral services will be held in the funeral home on Sunday, February 26, 2006, at 2 p.m. the Rev. Chuck Krieg, pastor of the Salem Methodist Church, Bremen, will officiate.
Burial will be in New Oakhill Cemetery, Plymouth.
Memorial gifts in Dennis’ memory may be given to a charity of the donor’s choice.