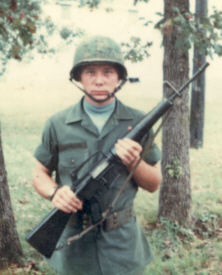 Dennis Vaughn Hostetler, 54, an 1120 W. Madison Street resident in Plymouth for the past 23 years, passed away at his residence unexpectedly of natural causes on Tuesday, June 19, 2012.
Dennis is the son of Plymouth residents, Neal R. and Roberta E. (Keiser) Hostetler, Sr. and was born there on January 2, 1958.
He was a graduate of LaVille High School with the Class of 1976. He immediately entered the Army National Guard and proudly served his Country for the next 16 years.
On June 27, 1992 in Plymouth, Dennis married the former Mary E. Stewart.
Dennis’ working career began with Dave & Ray’s Plymouth Grocery where he managed the Dairy Dept. He went on to other stores in sales and management. In 1984 he took a position with Foil Laminating Inc. in the Plymouth Industrial Park and became plant supervisor until his departure three years ago.
He loved his ’79 Camaro – “Henry”, his dogs; Joshua, Jamaica and Patch, his cat; Killer and of course his family and large group of friends. Dennis enjoyed times camping with family, bowling, golfing and socializing with friends.
He is survived by his spouse Mary, daughter; Lola Lynn Dwyer and her husband Kelly along with Dennis’ grandchildren; Kari Davis and Bishop Dwyer.
Along with his surviving parents are seven sisters and brothers; Sue Ann (John) Palmitessa of Cannon Falls, Minn., Neal (Sandy) Hostetler Jr. of Webster, Minn, James Hostetler of Plymouth, Randy (Kathy) Hostetler of Plymouth, Selene Foster and companion Scott Leland of Culver, Jeffery (Kathy) Hostetler and Rodney (Donna) Hostetler all of Plymouth. Numerous nieces and nephews complete his family.
Visitation will be held on Friday, June 22nd from 4 – 8 p.m. in the Johnson-Danielson Funeral Home, 1100 N. Michigan St., Plymouth. Services will be conducted there at 11 a.m. on Saturday, June 23rd with Chaplain Jeff Holztclaw and friend Don Isom participating.
Services will conclude with full military honors in the New Oakhill Cemetery, Plymouth provided by members of the Plymouth American Legion Post 27, Veterans of Foreign Wars – Marshall Co. Post 1162, the D.A.V. and the Army Honor Guard.
Memorial gifts may be given to the Marshall County Humane Society, P.O. Box 22, Plymouth, IN 46563