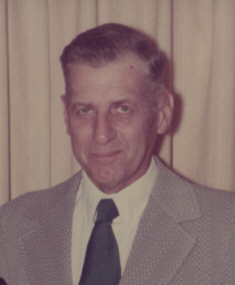 Dennis W. Burden, 92, of 625 Oakhill Ave., Plymouth, died of natural causes in Plymouth’s Miller’s Merry Manor, at 4:00 p.m. on Tuesday, February 22, 2011.
Dennis was born in Plymouth on May 13, 1918, the son of Elias and Clara Weisert Burden.
Dennis joined the Army Air Corps in August of 1940. He served in the Thirsty Thirteen Squadron and was honorably discharged in September of 1945 as a Tech/Sergeant.
On July 11, 1946, in Stittsville, New York, Dennis and Jean Soule were married. Jean died on September 1, 2007.
Dennis lived on 12B Road from 1949 to 2007. He was a farmer and also worked and retired from Bendix in South Bend.
He loved tinkering around the farm, fixing things and working with his hands. Dennis was always busy. He enjoyed living the last four years at Miller’s Assisted Living.
Dennis was a member of the First United Methodist Church. He was also a member of the VFW, the American Legion in Plymouth and Bourbon and the 40 & 8 organization.
He is survived by a son, Wesley and Josephine Burden and a daughter Linda Burden, a daughter living in Berkley, California.
Two granddaughters, Gwyn Burden and Brittany Burden, both of Fishers, Indiana survive as well.
He is also survived by his sister, Marcel Koenig, of New York.
He was preceded in death by his parents and his wife.
Friends may call at the Johnson – Danielson Funeral Home, 1100 N. Michigan, Plymouth, on Sunday, February 27, 2011, from 2 to 5 p.m.
A Memorial service conducted by the Rev. Larry Marhanka, pastor of the First United Methodist Church of Plymouth, will officiate at 5 p.m., following visitation.
Military rites will be accorded to Dennis following the service by the Plymouth American Legion, VFW and DAV. Interment will be in New Oakhill Cemetery.
Memorial gifts in Dennis’ memory may be made to the charity of the donor’s choice.