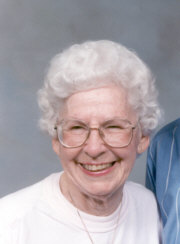 Dixie Lattimer Miller, 91, 805 Baker St., Plymouth, died in Miller’s Merry Manor of natural causes at 12:15 a.m. on Tuesday, December 9, 2003. She had been a Plymouth resident for the past fifty years, wintering in Sebring, Fla., for a number of years.
Born in Dorchester, Ill., on August 16, 1912, Dixie was the daughter of John M. and Lillian Weber Frazier. She was a graduate of Central Normal College of Danville, Ind., and Indiana State University, Terre Haute, Ind.
On November 25, 1936, in Danville, Ind., she and Albert Lattimer were married. Al, a teacher and coach in the Plymouth School system, died on May 23, 1974. On May 19, 1988, Dixie and Brock Miller, who met in Florida, were married in Plymouth. Brock survives her death.
A high school business teacher for 35 years, Dixie had taught in Round Grove, Ind., 1935-1937; in Richland Center, Grovertown and Fulton, 1942-1952; West Township, 1952-1954; Plymouth High School, 1954-1956; Etna Green, 1955-1956; Bourbon, 1956-1961; Triton, 1962-1964; Oregon Davis, 1954-1967; LaVille 1967- 1976, retiring in June of 1976.
A member of the Plymouth Church of the Brethren, she was active in the Friendly Thirty Club, was a Marshall County 4-H leader and, according to her children was the Shuffleboard Queen of Sebring, Fla.
At the age of 65, having retired from teaching, Dixie volunteered for a year’s mission service in Washington state through the auspices of the Brethren church. While in the west, she bought a horse which she enjoyed riding, an unknown interest to most of her family and friends. Dixie enjoyed sports. Especially tennis. At a younger age, she played and in later years, she was an enthusiastic spectator. She and Brock supported Plymouth High School athletic events and attended many of the games.
Survived by her husband, Brock, she has a daughter, three sons, 13 grandchildren and 19 great-grandchildren.
Her children are: Rebecca Hindman, Elkhart, Ind.; and sons and daughters-in-law: Michael G. and Suzanne Lattimer, Leesburg, Ind.; David C. and Wanda Lattimer, Argos, Ind.; and John C. and Gwen Lattimer, Muncie, Ind.
A sister, Joyce Thomas of Decatur, Ill., also survives.
Dixie was preceded in death by her parents; Al, her first husband; an infant daughter, Sally Lattimer and by a brother and a sister: Jack Frazier and Bonnie Airhart.
Friends are invited to come to celebrate her life with her family on Thursday, December 11, 2003, from 3 to 7 p.m. in the Johnson-Danielson Funeral Home, 1100 N. Michigan St., Plymouth, Ind.
Funeral services will be at 11 a.m. on Friday, December 12, 2003, at the Plymouth Church of the Brethren, 1130 N. Michigan St. The pastor of the church, David Kerkove, will officiate.
Memorial gifts in Dixie’s memory may be made to the Plymouth Church of the Brethren.