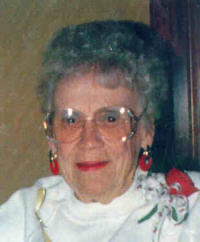 Dollie Marie Biggs, 88, the “doll lady,” loved for her skills in refurbishing dolls for Christmas for little girls all over Marshall County, died of natural causes at 3:10 a.m. on Tuesday, March 25, 2003. A lifetime area resident, Dollie died in the Pilgrim Manor Nursing Center, 222 Parkview St., Plymouth.
Born in Bremen on February 24, 1915, she was the daughter of Bert Alexander and Dora Estella Church Smith. She attended Sunnyside School in Bremen.
First married to Edward Leroy Matz, she later married Jack Biggs. Jack died in 1988.
Dollie was an avid Euchre player, and a former bowler. A vivacious, attractive woman, she enjoyed dancing. She was a good friend to her neighbors in Garden Courts East, her home for many years. As long as she could, she would drive many of them to their appointments and shopping trips, often with her favorite doll, Johnny, in his car seat, at her side.
She volunteered at the Marshall County Neighborhood Center two days a week for years. After a knee injury, she asked if she could take the scruffy dolls home and fix them up for Christmas.
She and her daughter, Pat, gathered up the used and abused dolls and stuffed animals donated to the Center. They would take them–over 100 a year– to Dolly’s apartment.
The dolls would be given a “make-over.” Everything from a bath to medical attention for missing arms, eyes or “maybe just a scratch.” Mother and daughter would make clothes for the dolls and shoes for their feet.
“You couldn’t tell them from new–right out of Santa’s bag–after Dollie got through with them,” Diane Smith said. “Dollie made Christmas happy for many, many underpriviledged children.”
She was a member of the ladies Auxiliary of the Plymouth V.F.W. Post 1162.
She was baptized in the First Lutheran Church.
Surviving her death is her daughter and son-in-law, Patricia M. and Glenn Penrod, Plymouth, and a daughter in-law, Marie Matz, Ft. Walton Beach, Fla.
Eight grandchildren, 28 great-grandchildren and 20 great-great-grandchildren also survive with several nieces and nephews.
Dollie was preceded in death by her parents, her spouses, a son, James L. Matz, a sister, Virginia Stills and a brother, Harvey Smith.
Friends may come to celebrate her life at the Johnson-Danielson Funeral Home, 1100 N. Michigan St., Plymouth, on Thursday, March 27, 2003, from 5 to 7 p.m.
Memorial Services for Dollie will be held in the funeral home on Thursday, following visitation at 7:00 p.m.
Burial will be in the Bremen Cemetery, Bremen, Ind.
Memorial gifts may be made in Dollie’s memory to her favorite cause, the Marshall County Neighborhood Center.