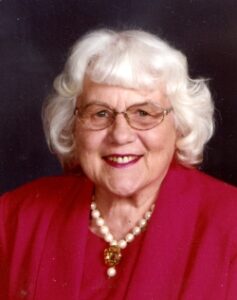 Dolores Ann Gehrke, 88, of Plymouth, IN, formerly of Michigan City, IN, passed away at her home on April 10, 2019. Known as Mickey to her family and friends, she had been in declining health the last two years.
She was born on November 1, 1930, in Michigan City, IN, on her motherâ€™s birthday to August and Genevieve (Seitz) Gill. They preceded her in death.
A graduate of the Class of 1949 of Michigan City Elston High School,where she was very active in sports and band. She participated in softball, volleyball and bowling and continued to participate in these until late into her forties.
Immediately upon graduation, she began working at the Chicago South Bend South Shore Railroad Line. She worked many positions from passenger ticketing to freight. She retired as a traveling auditor after 45 years of service in 1994.
On November 1, 1951, she married Harold Gehrke in Michigan City. He preceded her in death in 1988. They had one son, David (Karen) Gehrke of Plymouth. She is also survived by two grandchildren, Shannon (Greg) Guditis of Plymouth, and Douglas Gehrke of Plymouth, two great grandchildren, Natalie and Nolan Guditis of Plymouth. Other survivors include a sister, Norma Hapke, of Laporte, a brother, Richard Gill of Michigan City, as well as several nieces and nephews. She was preceded in death by a sister, Katie.
In 1997 she relocated to Plymouth to be near her son and grandchildren. She enjoyed watching her grandchildren participate in sports, band, speech and theatre arts. She was active in the First United Church of Christ in Plymouth where she served in various capacities and especially enjoyed the Bethlehem Market and fish fry events. She was also a member of the Lakeville Order of Eastern Star and a former member of the Women of the Moose and Marshall County Humane Society. She was a charter member of the Unit 171 of NARVRE (National Association of Retired Veteran Railroad Employees) and a member of Chapter 935 of the Transportation Communications Union/IAM.
Throughout her life, she loved railroads and trains, and collected associated memorabilia. Her love of animals was a constant as she loved many dogs and cats throughout her life. She also collected owls for years.
A memorial service/celebration of life will be held on Saturday, April 20, 2019, at the First United Church of Christ, 321 N Center st, Plymouth. A time of remembrance with the family will be from 9:30 â€“ 11:30 with a brief memorial service at 11:30 with Pastor Marie Siroky officiating.
Memorial contributions may be made in her honor to the Marshall County Humane Society P.O. Box 22 Plymouth, Indiana 46563, First United Church of Christ 321 North Center Street, Plymouth, Indiana 46563, or the Center for Hospice Care 112 South Center Street, Plymouth, Indiana 46563.