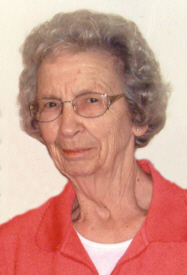 Dolores Mae Grover, 86, a resident of Argos since 1960, passed away at 6:14 p.m. on Saturday, December 14, 2013 in Catherine Kasper Life Center, Donaldson.
The daughter of Arthur and Henrietta Steinbrunner Pletcher, Dolores was born on April 17, 1927 in South Bend.
On June 25, 1960, Dolores and Charles M. Grover were married in Plymouth. Charles passed away on November 26, 2009.
She had worked as an assembler at Bendix in 9A for 30 years, retiring in 1983.
In her younger years, Dolores bowled in a league with her own ball and loved square dancing and dancing to polkas. Dolores enjoyed watching soap operas while drinking very hot coffee and eating Oreo cookies. She liked putting jigsaw puzzles together and enjoyed relaxing in her favorite lazy boy chair. She always had homemade chocolate chip cookies for the grandkids, at all times had a bowl of candy out and handed out Reese’s cups to family and friends. She is survived by two daughters: Donna (Dwight) Hite of Plymouth and Barbara Ann (Bruce) Pearson of Argos; five grandchildren: Nicole Hite, Travis Hite, Cody Hite, Kristin (Tony) Lidgard and April (Adam) Tener; five great grandchildren: Morgan Hite, Corbin Hite, Kalei Carlton-Lidgard, Riley Tener and Reese Tener ; a brother, Arthur Pletcher and a sister Barbara (Emery) Varga.
Dolores was preceded in death by her parents, a sister, Mary Ellen Kuball and a brother, Charles Pletcher. Funeral services, officiated by the Rev. Brandon Schadak, of the Blissville Church of the Brethren, will be at 4 p.m. on Friday, December 20, 2013, in the Johnson-Danielson Funeral Home, 1100 N. Michigan Street, Plymouth. Friends may visit with Dolores’ family from 5 – 7 p.m. in the funeral home following the service.
Private graveside services will be held in the Poplar Grove Cemetery in Argos.
Memorial gifts in Dolores’ name may be made to the Center for Hospice Care. 112 S. Center Street, Plymouth, Indiana 46563.