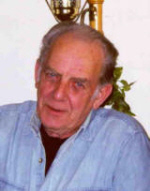 Don E. Davidson, 71, 7434 11A Road, Inwood, suffered an unexpected heart attack and died in St. Joseph Regional Medical Center, Plymouth, at 12:26 p.m. on Saturday, April 27, 2002.
A lifetime Marshall County resident, Don was born in Inwood, the son of Edward W. and Edna Harris Davidson, on July 20, 1930. He attended Inwood and Plymouth schools. During the Korean Conflict, Don served his country in the United States Army. On July 23, 1953, at the Inwood United Methodist Church, Don and Doris L. Smith were married. Self-employed as a painter and carpenter, Don was currently working part-time for the City of Plymouth at the Waste-Water Treatment plant, having started there on April 30, 1990. He also had been a Plymouth school bus driver for 28 years. He was a friendly, out-going person and enjoyed having coffee with his friends at the truck stop. A loving family man, his best times were spent with his family and grandchildren. Don is survived by Doris, his wife of almost 49 years and their children, three daughters and two sons. The daughters and their husbands are: Ann and Mark Jones, Plymouth; Londa and Steve Masterson, Tyner, and Sherry and Terry Harman, also of Plymouth. His sons and their wives are: Donnie and Susie Davidson and Chris and Robin Davidson, all of Plymouth. Ten grandchildren and four great-grandchildren also survive together with three brothers and two sisters. The brothers are Dick Davidson, Howe, Ind., and Lysle “Skip” and Fran Davidson, Plymouth, and Ronnie Davidson, residing in Kentucky. Both sisters live in Plymouth; Darla Carlberg and Barbara and Larry McCan. Don was preceded in death by his parents and two brothers: Chester D. and Junior Davidson. The family will receive friends and share memories of Don from 4 to 8 p.m. on Tuesday, April 30, 2002 , in the Johnson-Danielson Funeral Home, 1100 N. Michigan St. , Plymouth. Services in the funeral home will be at 11:30 a.m. on Wednesday, May 1, 2002. The Rev. Alice Archer, pastor of Mt. Pleasant Church of the Brethren and the Rev. Mike Dixon, pastor of the Inwood United Methodist Church, will officiate. Full military graveside services provided by the VFW Post 1162 will be held at New Oakhill Cemetery, Plymouth. Memorial gifts in Don’s memory may be made to the Marshall County Hospice.