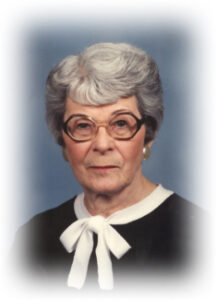 Dona M. Fetherolf, 90, died of natural causes in the Catherine Kasper Life Center, Donaldson, at 5:07 p.m. on Tuesday October 30, 2007.
Dona was born the daughter of Loren “Charles” and Effa M. (Foust) Clouse in Burnettsville, Indiana on March 6, 1917.
She was a former resident of Valparaiso, and a 1935 graduate of Plymouth High School.
After high school she married James D. Fetherolf on May 11,1940 in Richmond, Indiana, he preceded her in death in 1952. After his passing she married David T. Fetherolf Sr. on June 11, 1954 in Walkerton, Indiana, he then preceded her in death in 1974.
In 1935, Dona began working at the law offices of McKesson & Kizer and then Kizer & Neu, from which she retired in 1979 after 44 dedicated years.
Dona was a member of the 1st United Methodist Church for over 40 years. She was also a Member at Large for the Delta Theta Tau. Dona enjoyed gardening, yard work, knitting, reading, and doing cross word puzzles.
She is survived by a son Jay D. and his spouse Carolyn Fetherolf of Apopka, Florida, one grandson James D. & Debra Fetherolf of Cartersville, Georgia, three granddaughters Erica & Daniel Vaughn of Cartersville, Georgia, Erika Wright of Albertville, Alabama, and Amanda & Clarke Sturge of Miami, Florida. Ten great-grand children and one sister; Virginia Minnes of Chilicothe, Illinois, survives as well.
Dona was also preceded in death by a brother Wayne Clouse, and a sister Marga Fertig.
A special time of sharing will be held Friday November 2, 2007, at the New Oakhill Cemetery Chapel from 1-2 p.m., with services held immediately following at 2 pm. The Rev. Dr. Dean Fager of 1st United Methodist Church, will officiate.
Internment will be in New Oakhill Cemetery, Plymouth.
Memorial gifts in Dona’s memory may be made to the charity of the donor’s choice.