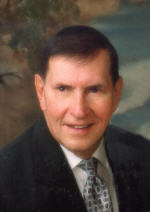 Donald A. Bottorff, 71, a Marshall County resident most of his life, living at 20509 W. 7th Rd., Plymouth, for over 40 years, died at 7:55 a.m. on Wednesday, August 20, 2003, in the Indiana University Medical Center, Indianapolis, Ind. Don had been in declining health over the past year and was recently diagnosed with acute leukemia.
Born on July 1, 1932, in Plymouth, he was the son of James A. and Doris A. Brosius Bottorff. He attended school in West Township for ten years and spent his junior and senior years at Grovertown High School, graduating in 1950.
An active duty Army veteran in the Korean Conflict, from 1951 to 1953, he was honorably discharged as a sergeant.
On July 5, 1958, Don and Evelyn D. Trease were married in Donaldson, Ind.
Don first worked as manager for various grocery stores. He then managed two shoe stores and for 22 years, worked at the Bonnie Baking Company in LaPorte, Ind. He later was the motel manager of the L&K and was the opening manager of the new Super 8 Motel. He retired and soon returned to the bread business, working part-time with Lewis Bakery, LaPorte.
A real people person, he valued his own self worth by his ability to simply work and contribute in various ways.
Don’s hobby was raising chickens and birds of all kinds. He enjoyed gardening and outdoor work. He had a great personal Christian faith and was devoted to First Baptist Church, his spiritual home, for nearly 40 years, where he served as a Deacon and was a member of Gideon International.
Don is survived by Evelyn, his wife of 45 years, and by their daughter, Connie R. and Lonnie Nicholl, Plymouth, a foster son, Joe and Debbie Horon of Charlevoix, Mich., and by four other foster children.
Four grandchildren also survive: Jeremiah, Joshua, Rachel and Ruth Nicholl, all of Plymouth, together with a brother, Wilmer and Edna Bottorff, Plymouth, and two sisters; Mary Ellen Hines, Plymouth, and Margaret Moon, Roanoke, Ind.
Numerous nieces and nephews also survive.
Don was preceded in death by his parents and by four sisters and four brothers. They are: Helen, Sarah and Mildred Bottorff and Ruth Napierkowski and Harold, Arthur “Bud,” James Jr., and Richard Mullen.
Visitation with the family and a celebration of Don’s life will be held on Friday, August 22, 2003, from 2 to 4 and 6 to 8 p.m. in the Johnson-Danielson Funeral Home, 1100 N. Michigan St., Plymouth.
Funeral services will be at 11 a.m. on Saturday, August 23, 2003, at the First Baptist Church, State Road 17, Plymouth. Don’s son-in-law the Rev. Lonnie Nicholl, pastor of the church, will officiate.
Burial will be in Union Cemetery, West Township, Plymouth.
Memorial gifts in Don’s name may be made to the church or to the Gideon Bible Program.