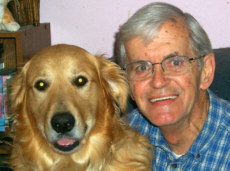 Donald A. Rowe, 67 of 11288 Shady Lane Drive Plymouth died on Wednesday, October 13, 2010 at 8:45 pm in Memorial Hospital, South Bend after a three year battle with cancer. He had been a resident of Plymouth since 1978 coming from Starke County.
He was born at home in Bass Lake, Indiana on August 11, 1943 to Harold C. and Viola J. (Jett) Rowe. He attended Knox Schools and graduated from Warren Central High School in Indianapolis with the class of 1961.
Don attended Palomar College in California and Purdue West Central studying drafting and engineering. He served his country proudly from 1962 to 1966 in the United States Air Force.
On August 20, 1966 in Chicago, Illinois in the Ravenswood Fellowship United Methodist Church he married Kathryn E. Gager, whom he met following a waitressing accident.
Don worked for over 35 years at National Steel as a computer operator, he later worked at Family Express in Plymouth and also for Culver Academy until 2008. Don was a country and western line dance instructor for 20 years at locations like the Webster Center, Moose Lodge, VFW and communities of Nappanee, Culver and Knox.
His memberships include the Plymouth Moose Lodge and VFW Auxiliary. He enjoyed entertaining people as a DJ, whom he was affectionately known as “Muckwater” as the owner and operator of Don’s DJ and Karaoke. He spent numerous hours volunteering for the Special Olympic dances at the Logan Center.
He spent his free time gardening, bowling and golfing. He also enjoyed playing flight simulator on his computer and talking on his C B and Ham radio. Don always made time for his two cats and dog.
Don is survived by his wife of 44 years, Kathryn, his daughter and granddaughter Cheryl A. Rowe of Milwaukee, Wis. and Ahriaz C. Rowe of Tomah, Wis.
He is also survived by his sister, Gloria Speck, Hebron, Indiana and his brother William E. Rowe of Knox, Indiana, along with several nieces and nephews.
The family will receive friends from 1 to 3 p.m. on Sunday, October 17th in the Johnson-Danielson Funeral Home, 1100 N. Michigan St. Plymouth. Services will follow visitation at 3 p.m. in the funeral home. The Rev. Charles Krieg will officiate.
Military honors will be accorded to him by the Plymouth American Legion Post 27, the VFW Post 1162 and the local DAV chapter following the funeral service.
Memorial gifts in Don’s memory may be made to the Marshall County Humane Society P.O. Box 22 Plymouth, Indiana 46563