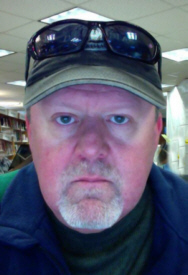 Donald D. “Donnie Jr.” Weck, 49 and formerly from South Bend, Indiana, passed away on Wednesday, October 1, 2014 in his home.
Born January 17, 1965, Donald was the son of Donald D. Sr and Loretta M. (Rippe) Weck. He graduated from Chesterson High School. Donald served our country as an U.S. Marines. He will be remembered as being quick witted and he enjoyed riding his bike along the river. Donald will be remembered by his sisters: Sherry of Warsaw, Dana of Chesterton, Kelly of Knox, and Susan of Medaryville, and brothers: Jim and Chris of Chesterton; his nephews Tye of Warsaw and Jacob of Medaryville; his Aunt JoAnn, Aunt Donna and Uncle Bob, as well as, Christina and Dennis. He will also be missed by his beloved dog “Shadow”.
Private graveside services will be held on Friday, October 10, 2014. In Lieu of flowers please send donations to the Aids Ministry P. O. Box 11582 South Bend, IN 46634.