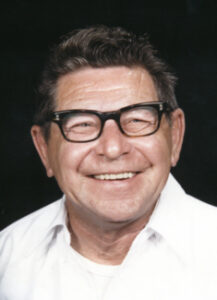 Donald D. White, 87, a former Plymouth resident, passed away at 12:26 p.m. on Tuesday, January 26, 2014 at the Elkhart General Hospital, Elkhart.
Born in Plymouth on October 24, 1926, Donald was the son of Robert Rosco and Florence Edna White. He attended school in Plymouth.
Donald served for our country in the U.S. Army during WWII.
He married Margaret L. White in LaPorte in 1953. She would precede him in death on May 2, 1984. He later married Myrtle R. White in Plymouth on December 26, 1984. She would precede him in death on August 4, 1999.
Donald worked as a foreman in Stevensville, Michigan making die cast auto parts for the Ford Motor Company. He retired in 1992.
He could always be found in his garage, tinkering with old cars and doing body work. He also collected die cast car models.
Donald is survived by his step-children: Robert L. Thomas of Knox, Sandy Stiles of Plymouth and Kenny (Joan) Sisk of Texas; his sister, Florence Heidtman of Elkhart; 4 grandchildren and 5 great-grandchildren; and numerous nieces and nephews.
He was preceded in death by his parents, his wives, and his siblings.
Graveside services will be at 11:00 a.m. on Saturday, June 28, 2014 in the New Oakhill Cemetery with Military Honors provided by members of the Knox Veterans of Foreign Wars Post 748.
Memorial contributions can be made to Center for Hospice Care, 112 S. Center St. Plymouth, IN 46563.