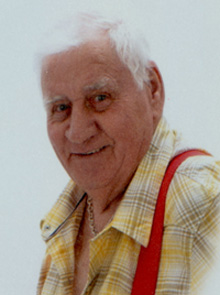 Donald E. Daugherty, 86, and formerly of Plymouth for 65 years, passed away at Millerâ€™s at Oak Pointe in Columbia City with his family by his bedside at 12:05 a.m. on Wednesday, June 14, 2017.
Don was born in North Judson, Indiana on January 24, 1931 to Russell and Dorothy (Reinholt) Daugherty.
In Knox on September 24, 1954, Don married Mildred â€œMickâ€ Fisher. The two would start a family and he would farm the area around Tyner and Plymouth. She would precede him in death.
On November 20, 1982 in Plymouth, Don married Elinor D. â€œDarleneâ€ Jackson. The couple would make Columbia City their home for the past six years.
He worked for Zimmer-Biomet for 23 years before his retirement in 1991. He was a member of the Moose Lodge in Plymouth and the Eagles Lodge.
Don was fond of John Deere tractors, enjoyed woodworking and camping with his family. Darlene and he were Florida snow birds for over 14 years. Lilâ€™ Angel was his adored puppy whom he spoiled greatly. A social guy, Don was in the CC Buggy Club, a golf cart club in Columbia City, participating in many of the local parades.
Don is survived by his wife, Darlene of Columbia City, daughter Nancy (Rex) Edel of Lakeville, and step-children: Nila (Randy) Reimer of Columbia City, Carol (Jerry) Everly of Stem, NC and Allen Wolfe of Suffolk, VA; 9 grandchildren and 23 great-grandchildren;and son-in-law, Paul Beaver of Plymouth.
His siblings include: Jim Daugherty of Plymouth, Luther (Joan) Daugherty of Lowell, IN, Bob (Millie) Daugherty of Argos, Dick (Phyllis) Daugherty of Plymouth, Tom Daugherty of South Bend, Vic Daugherty of Plymouth, Kathryn (Orville) Holcomb of Lowell, IN, Carolyn (Eurrat) Saylor of Grovertown, Jane Ann (Dan) Miller of Plymouth and Barb Gouker of Plymouth.
Don was preceded in death by his parents, his first wife Mildred â€œMickâ€ Daugherty, daughter Donna Beaver, brother Jerry Daugherty, baby sister Marilyn Daugherty, sister-in-law Norma Daugherty and brother-in-law Michael Gouker.
Visitation will be held on Friday, June 16, 2017 from 4-7 p.m. EST in the Johnson-Danielson Funeral Home, 1100 N. Michigan Street, Plymouth.
Funeral services will be held at 10 a.m. EST on Saturday, June 17, 2017 in the funeral home with Rev. Charles Krieg officiating.
Burial will be in the New Oak Hill Cemetery.
Memorial contributions can be made to the American Cancer Society, P.O. Box 22718, Oklahoma City, OK 73123-1718.