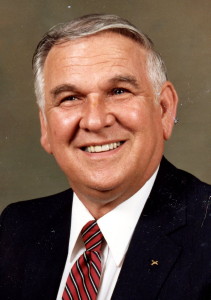 The family of Donald J. Palbykin will receive friends on Friday, May 10th from 5-7 pm in the Johnson-Danielson Funeral Home, 1100 N. Michigan St., Plymouth, Indiana. Memorial services will be held on Saturday, May 11th at 11 a.m. in the funeral home with Life Celebrant James Smart. A luncheon to further celebrate Donâ€™s life will immediately follow at Christoâ€™s Banquet Center.
Don entered peaceful rest surrounded by his family on the morning of April 6, 2019 in Chandler Arizona. Born on October 11, 1929 in Oak Park, Illinois, Don would realize many years later that he was born in the same hospital and in the same year as the woman who would become his soulmate and wife of nearly 70 years, Elizabeth Mae Perry, â€œBetty.â€ As the son of Albert A. Palbykin and Cecelia M. Keiper, Don grew up on his grandparentsâ€™ farm near Myers Lake. He would later come to admire his grandfatherâ€™s cutting-edge farming practices and remark on his motherâ€™s notoriously delicious cooking.
Don attended elementary school at St. Michael Academy in Plymouth and then became a 1947 graduate of Lane Tech High School in Chicago. Aviation guided and lifted Donâ€™s life. Even from an early age he was enamored with aircraft and mechanics in general. This passion, coupled with his big personality and single-mindedness, lead him to become a pilot for Stockert Charter Services, and eventually culminated in him becoming president of Skystream Inc., a startup he helped to build into the number one Cessna airplane dealer in the Midwest. He cleverly marketed this business by painting the planes â€œPepto Bismol pinkâ€ and wore a matching suit to embody the slogan â€œThink Pink.â€ As a pilot, Don flew for many celebrities such as: Perry Como, Elizabeth Taylor, Elton John, Olivia Newton-John and Madonna, to dignitaries like: Gov. Otis Bowen, Senator Edward Kennedy, the Crown Prince and Princess of Norway, to such commentators as: Chris Schenkel and Paul Harvey. He also flew the first transcontinental flight from Plymouth, Indiana. Don and Betty were married on May 29, 1948, and started a family soon after. To support his growing household, Don worked at Studebaker in South Bend for more than 8 years. As years passed, with a shared entrepreneurial spirit, Don and Betty embarked on many endeavors togetherâ€”forming real estate and rental businesses, traveling the world, visiting family, and finally settling in Las Vegas, NV where they built a retirement home. Together, Don and Betty are survived by 7 children: Stephen James Palbykin, Alan Mark Palbykin, Martin Scott Palbykin, Julie Kay Hicks, Debra Jeanne Jones, Susan Elizabeth Palbykin and Ann Marie Dickey, 14 grandchildren, and many great grandchildren. Don was also deeply involved in his community. He was a member of the Plymouth Rotary Club and served as a past president. He and Betty started an annual scholarship for Plymouth High School students wishing to enter a career in the trades. They supported the Marshall County Historical Society and were active members at St. Michael Catholic Church throughout their married life, and in 2015 they researched and acquired the churchâ€™s new organ.
Interment will be in the New Oak Hill Cemetery, Plymouth.
In lieu of flowers, memorial gifts may be directed to: Ancilla Domini College, P.O. Box 1, Donaldson, IN 46513 or to the new Plymouth High School CTE (Career & Technical Education) – Flight Program, c/o 1 Big Red Drive, Plymouth, IN 46563. Please specify in honor of Mr. Donald J. Palbykin.