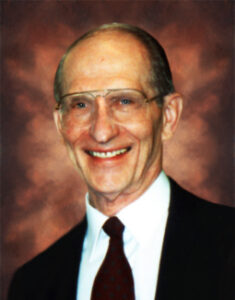 Donald Kenneth Neidig, 92, a Plymouth resident and longtime businessman, passed away Tuesday afternoon, March 11, 2014 at his residence.
Don was born in Bourbon on February 7, 1922, the son of Harold J. and Trella (Lemler) Neidig.
He was a 1940 graduate of Lincoln High School, Plymouth, with the class of 1940. Don also graduated from Manchester College with a degree in Business Administration.
Don and Dorothy E. “Dot” Phillips were married on October 16, 1941 in Columbia City, Indiana. They were together for over 70 wonderful years before Dot passed away on March 6, 2012.
He started his working career at South Bend Tool and Die until 1955 when he and his brother, Noble, founded Indiana Tool and Manufacturing , now I.T.A.M.C.O. Don never really retired as he enjoyed seeing the successes of subsequent generations as they entered the business. He became known as “Uncle Don”, not only to the boys, but to everyone that knew him. His resolute position on issues was softened by his charm and compassionate demeanor. His work ethic and love for doing what was right, is a legacy that is hard to match. His philanthropy was quietly accomplished, and his generosity was spread across many needful causes during his lifetime.
Don along with his wife, were charter members of Plymouth Grace Baptist Church where he served as a Deacon and had taught Adult Sunday School for over 40 years. He was an avid reader, having an extensive library. He enjoyed his dog, the outdoors and hunting.
His sweet spirit shown through even during his declining health and never uttered a complaint. He and the family so appreciated the efforts of his care givers: Michelle, Michele, Marilyn, Tammy, Veronica, April, and Regina as well as the Center for Hospice Care.
Surviving Don is his brother and sister-in-law; Noble L. and Barbara Neidig of Plymouth and nephews and nieces that became their “children”. They are: Gary L. and Robin Neidig of Plymouth, Mark A and Debbie Neidig of Erie, PA, David K. and Penny Neidig of Plymouth, Daniel A. and Melissa “Noele” Neidig of Plymouth, Stephen L. and Christine Neidig of Salt Lake City, UT and Phillip L. and Elizabeth Neidig of Laguna Hills, CA. Numerous great and great-great nephews and nieces also survive.
He was preceded in death by his parents and wife, Dot.
Visitation will be from 10:00 a.m. to 12:00 p.m. on Thursday, March 13, 2014 in the Grace Baptist Church, 1830 N. Michigan Street, Plymouth, where funeral services, officiated by Pastor Mark Elliott, will be held immediately following visitation at 12:00 noon. Burial will follow in the New Oakhill Cemetery, Plymouth.
In lieu of flowers, memorial gifts may be made to the Grace Baptist Church.