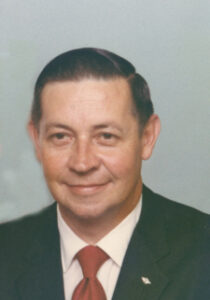 Donald K. “Don” Travis, a lifetime Plymouth resident, died of natural causes in Saint Joseph Regional Medical Center, Plymouth, on Saturday, January 27, 2007, at 7:49 p.m. He was a month shy of his 79th birthday.
A very giving, caring person, Don was known as someone who would help anyone in need. He was a devoted husband, father and grandfather.
A prominent attorney with over 52 years in the practice of law in Marshall County, Don was a senior partner in the law firm of Stevens, Travis, Fortin and Lukenbill.
Born in Plymouth, Indiana, on February 23, 1928, Don was the son of Roland M. and Faye Marie Gibson Travis.
He graduated from Plymouth High School with the class of 1946, and from the University of Notre Dame, earning a B.S. in Commerce, followed by, in 1952, a Juris Doctor in Law from the University of Notre Dame School of Law.
On June 9, 1951, in the First United Methodist Church in South Bend, Don and Marian M. Kaszas were married.
He served for nine years in the Indiana National Guard and was a former Prosecuting Attorney, City Attorney, County Attorney and Drainage Board Attorney. He had extensive legal knowledge and experience in the trial, Appellate and Supreme Courts and frequently served as Judge Pro Tem.
Fond of outdoors activities, Don enjoyed hunting and fishing. He and his father were excellent skeet shooters.
A Notre Dame football fan, Don took pleasure from constructing his and Marian’s cottage at Lake of the Woods. He loved being with his grandson, Travis, and was proud of all of his accomplishments.
A civic leader, Don was active in numerous organizations, including serving as president of the Marshall County Bar Association and the Kiwanis Club. He was a member of the Chamber of Commerce, the Sheriffs Merit Board, the Indiana and American Bar Association, the Notre Dame Alumni Association and Notre Dame Club of St. Joseph County.
He served as chairman of the Community Chest (United Way), was a Mason, Scottish Rite and Shrine member and was on the Board of Directors of the 5 County Mental Health Clinic (Bowen Center).
A member of the First United Methodist Church of Plymouth, Don served as a trustee on the board and was active with the Boy Scouts and Campfire Girls.
Don is survived by Marian, his devoted wife of 55 years, their daughter and son-in-law, Nancy Jo Lillian and Bob Coles of Yorktown, Indiana and his grandson, Travis R. Coles.
Don was preceded in death by his parents and his grandmother, Lillian Liggett Gibson.
Friends are invited to celebrate Don’s life with his family on Tuesday, January 30, 2007, from 4 to 8 p.m. and after 7:00 a.m. Wednesday, January 31, 2007, in the Johnson-Danielson Funeral Home, 1100 N. Michigan St., Plymouth.
Funeral services for Don will be held at 1 p.m. on Wednesday, January 31, 2007, in the funeral home. The Rev. Rose Woodke, visitation pastor of the First United Methodist Church, Plymouth, and the Rev. Dr. Ronald Naylor, pastor of the First Presbyterian Church of Muncie, Indiana, will officiate at the services.
Burial will be in New Oakhill Cemetery, Plymouth.
Memorial gifts in Don’s memory, may be made to the First United Methodist Church, Donald K. Travis Memorial Fund.