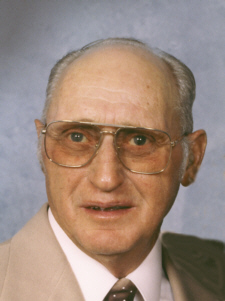 Donald L. “Don” Swihart, 81, died in Pilgrim Manor, after an extended illness, at 11:30 A.M. Thursday, April 13, 2006. Don, a resident of 2108 Meadow Lane had lived in the LaPaz area since 1968.
Born in Rochester, Indiana on August 14, 1924, he is the son of Sumner F. and Clara A. Ackles Swihart. He attended Marshall County schools.
On March 21, 1942, in Plymouth, Don and Freida L. Wilhelm were married.
In World War II, from 1944 to 1946, he served in the Pacific Theater as a T5 in the United States Army, before receiving a medical discharge. A disabled veteran, he was a member of the Bremen VFW.
For 31 years, Don worked in the Bendix Aircraft Division in South Bend, manufacturing airplane struts. He retired on April 30, 1983.
Don was crazy about fishing. He would fish six days out of seven if he could. He and Freida lived in Avon Park, Florida for nearly 15 winters. Together they loved to travel and camp in their motor home. Above all, he enjoyed all of the sporting activities of his grandchildren.
Don is survived by Freida, his wife of 64 years and by their children, two sons and five daughters.
His sons are: Richard L. and daughter-in-law, Alice Swihart, Walkerton; and David E. and daughter-in-law Brenda Swihart, Plymouth.
Also his five daughters , Sandra L. and Jerry Anders, Plymouth ; Linda K. and Paul Tyler, LaPaz, Indiana ; Brenda L. and David Hummel, Bremen, Indiana; Donna S. Roberson, Bremen, Indiana and Debra A. Swihart, Warsaw, Indiana. Twenty grandchildren and 25 great-grandchildren survive as well.
Six sisters and three brothers also survive. They are: Frances P. Swihart and Eva M. Dunn, both of Plymouth, Indiana; Mary L. Blakeley, Michigan; Ethel M. and Bill Whaley, LaPaz, Indiana, Bonnie L. Sliter and Connie S. and Ralph Sterling, all of Arkansas.
His brothers are Paul J. and Edna Swihart, Plymouth, Indiana; Irve H. and Audrey Swihart, Avon Park, Florida; Roy G. and Diane Swihart, Plymouth, Indiana.
Don was preceded in death by his parents and by two brothers, Ray W. Swihart and Bobby D. Swihart.
Friends are invited to celebrate the life of Don Swihart with his family in the Johnson-Danielson Funeral Home, 1100 N. Michigan St., Plymouth, from 3 to 7 p.m. on Saturday, April 15, 2006.
Funeral services for Don will be held on Monday, April 17, 2006, at 10:30 a.m. in the funeral home. Pastor Glenn Jerrell, pastor of the Grace Reformed Church in Walkerton will officiate.
Burial will be in New Oakhill Cemetery, Plymouth.
Memorial gifts in Don’s memory may be made to the Bremen V.F.W. Home or to a charity of the donor’s choice.