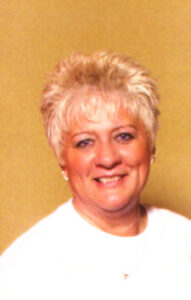 Donna E. Beaver, after a three and a half-year courageous fight against the ravages of colorectal cancer, died, surrounded by her loving family, at 4:35 a.m. on Sunday, October 28, 2007, in Saint Joseph Regional Medical Center, Plymouth.
A lifetime Plymouth resident, Donna was 51-years old.
Born in Plymouth on May 18, 1956, Donna was the daughter of Donald and Mildred “Mick” Fisher Daugherty.
A 1975 Plymouth High School graduate, she graduated from the Vogue Beauty School in Mishawaka in 1986.
On July 12, 1975, at the Sunrise Chapel in Plymouth, Donna and Paul J. Beaver, Jr. were married.
A cosmetologist for over twenty years, Donna spent the last several years at Sunsation Beauty Salon as well as helping to clerk at the family auction business, Beaver Auction Services.
A beautiful, active woman, Donna liked to bowl, read and was a NASCAR racing fan. She especially enjoyed spending time with her family and friends and particularly with her three-year-old granddaughter.
She was looking forward to the birth of her first grandson, due on December 13th.
She was a member of the Women of the Moose and was recently honored with a benefit party held by Moose Lodge # 741. It was a happy evening and she said that it made her “feel good to know that people cared about me and my family.”
Donna is survived by Paul, Jr., her husband of 32 years and by their two children, daughter, Shannon (Justin) Lancaster, granddaughter, Paige L. Lancaster, Leiters Ford, and their son, Shay (Stephanie) Beaver, Decatur, Ind.
Her father and step-mother, Donald and Darlene Daugherty, Plymouth, and a sister, Nancy (Rex) Edel, Apache Junction, Ariz., also survive.
Paul J. (Lana) Beaver, Sr., Donna’s father-in-law and step-mother-in-law, Culver, also survive her death.
Two stepsisters, Nila (Randy) Reimer, Columbia City, Ind., and Carol (Jerry) Everly, Stem, N.C., and a step brother, Allen Wolfe, Suffolk, Va., survive as well, together with several aunts, uncles, nieces, nephews and cousins.
Donna was preceded in death by her mother “Mick” on May 18, 1979, and by her mother-in-law, Jeannette Beaver in 1994.
Friends will be welcomed by her family to share memories of Donna from 4 to 8 p.m. on Tuesday, Oct. 30, 2007, and after 7 a.m. on Wednesday, Oct. 31, 2007, in the Johnson-Danielson Funeral Home, 1100 N. Michigan St., Plymouth. The Moose Lodge will have a special service for Donna following visitation at 8 p.m. in the funeral home.
Funeral services will be at 11 a.m. on Wednesday, Oct. 31, 2007, in the funeral home. Rev. Stephen Cox, pastor of Cornerstone Community Fellowship, LaPaz, will officiate.
Burial will be in New Oakhill Cemetery.
Memorial gifts may be given to a charity of the donor’s choice.