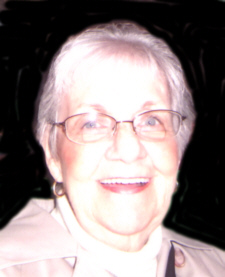 Donna Mae (Davis) Goss-Smith was surrounded by her children and Pastor Tom Padberg of Hospice in her home when she passed on Jan. 9, 2009. She will be missed and remembered for all she contributed to her communities she worked for and lives she touched.
Donna was born to George E. and Hattie M. (Williams) Davis in Detroit, MI. She was preceded in death by a brother Jack, and sister Joan Foor of Westland, Mi. Donna graduated from Cooley High in Detroit in 1952. On Dec.11,1953, Donna married Leo Goss and shared four children; Betty Uebelhor of Indianapolis, Leo Charles (Martha) Goss of Cleveland, Kathy (Kim) Masten of Mishawaka, and Sharon Goss Reeves (Tom Ricksgers) of Niles. There are 8 grandchildren and 2 great grandchildren.
In 1979 Donna met Cecil Milo Smith; they eventually married on July 20, 1996. Cecil has four children; Marty (Jackie) Smith, Suzy Smith, Pam (Doug) Edwards, and Sandy (Jim) Holderread. There are 8 grandchildren and 9 great grandchildren.
Donna worked for the St. Joseph County American Red Cross in South Bend In, for 20 years, retiring in 1996. During her career Donna worked as a National Disaster service instructor, Director of Disaster, Blood and Community services, worked with and for Veterans benefits services. After retiring she served on the Executive board as Disaster chairman.
Donna graduated from Indiana University with an associate’s degree in General Studies on May 7, 1991.
In 1999, Donna felt compelled to seek part time work at Lindenwood Retreat Center at Ancilla College. Donna loved the job as a Hostess, and working for the book store. She was surrounded by fascinating, delightful people who will miss her energy and unfailing smile. She remained a faithful employee until December of this past year until her health would not allow.
Donna and Cecil were active members at Calvary Lutheran Church in Plymouth. Pastor Steven Resner was very much a spiritual presence in both their lives just prior to their deaths which occurred just 6 days apart. He helped all the family members through this Heart wrenching experience. We thank all of you for your thoughts and prayers through this devastating time of losing two wonderful people.
Visitation with the family will be held on Tuesday, January 13th from 10 a.m. until Noon at the Calvary Lutheran Church, 1314 N. Michigan St., Plymouth. Services will be held there at Noon. Pastor Resner will officiate.
Memorial contributions can be made to American Red Cross, and Hospice House of your choice.