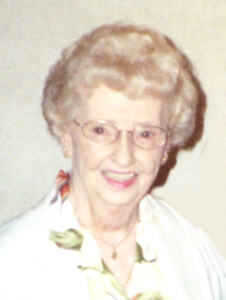 Donnabelle Strang, 86, known as Donnie to friends and family, died of natural causes at 7:55 a.m. on Friday, February 8, 2013 at her residence.
She was born north of Teegarden to Owen and Dora Grile Johnson. The youngest of six children, she attended Teegarden Grade School, graduated from Tyner High School with the class of 1944 and attended a short term business school, then worked in the office at Oliver Plow. On August 23, 1947, she married her high school sweetheart, Earl “Bud” Strang. They enjoyed 65 years together. During this time they had three children.
They were able to spend 23 winters in Florida. Her interests included sewing, reading, community activities, church, lodge and school. In her later years, she spent many hours listening to books on tape. She was a member of the Tyner United Methodist Church, the UMW group and a 50 year member of the Tyner Rebecca Lodge.
She was employed 23 years at the Urey Middle School, Polk-Lincoln-Johnson School Corporation.
She is survived by her husband, Bud Strang; son, Michael (Kris) Strang; daughter, JoEllen (Tom) Hess; six grandchildren: Chad Strang, Angie (Matt) Moller, Andy (Francine) Patterson, April (Brian) Gallagher, Stewart Riddiough and Steven Riddiough; along with five great grandchildren: Michael, Kaleigh and Joshua Moller, Grace and Claire Gallagher and one step great grandson, Nicholas Granered. She is also survived by several beloved nieces and nephews including Diane (Bruce) Henry.
She was preceded in death by their son, Richard Strang, parents Owen and Dora Johnson and siblings Gerald Johnson, Myrtle Campbell, Gleda Wise, Russell Johnson and Florence Gindelberger.
Visitation will be Monday, February 11, 2013 from 4-7 p.m. at Johnson-Danielson Funeral Home, 1100 N. Michigan Street, Plymouth. The Tyner Rebecca Lodge will be providing a memorial service at 7 p.m. on Monday in the funeral home.
Funeral Services will be Tuesday, February 12, 2013 at 11 a.m. at Johnson-Danielson Funeral Home, with Rev. Tamara Boggs officiating. Visitation will resume one hour prior to the service in the funeral home.
Burial will be in the Tyner Cemetery.
Memorial contributions may be made to Tyner United Methodist Church, 4503 French Street, Plymouth, Indiana 46563 or the Center for Hospice Care 112 S. Center St. Plymouth IN 46563.