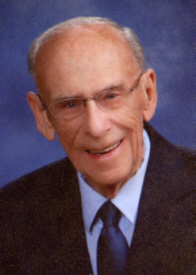 Donovan E. “Don” Boomershine, a Plymouth resident since 1973, died at 1:10 a.m. Friday, September 18, 2015 in his home with his family by his side. Don grew up in Ohio, moving to Texas for ten years before moving to Plymouth.
Don was born in Belle Center, Ohio to Harley R. and Hilda M.C. (Holp) Boomershine. He graduated from Verona High School with the class of 1949. After high school, Don served in U.S. Army during the Korean Conflict. He was Honorably Discharged in May of 1953. He then attended Miami University in Oxford, OH and graduated with a Bachelor of Science and Business degrees.
On June 17, 1956, Don would take as his bride Charlotte J. Geeting in Lewisburg, Ohio. She would precede him in death on July 21, 2002.
Don worked for Wayne Bus Company in Richmond, IN. Moving to Texas, he worked as a plant controller for Bendix Mobile Homes for 10 years. From there and until his retirement in 1993, Don worked as an accountant then vice president of finance for Bomarko.
An active member of the Calvary Lutheran Church in Plymouth, Don served as elder and past president.
Don would take Jeanne M. Glaub as his wife on February 14, 2004.
Don took great pride in being a veteran. He enjoyed cars, his favorite being classic cars, and was a Route 66 fan. Don also had quite the hat collection. He adored time spent with his family and memories made with his grandchildren. Don is survived by his wife of 11 years, Jeanne of Plymouth, two sons, two daughters and their families survive. His children are: Brett (Stephanie) Boomershine of Plymouth, Jeff (April) Boomershine of Noblesville, IN, Jill Kluszczynski of South Bend and Ann (Brent) Sobierajski of Noblesville, IN. 13 grandchildren survive and two step-sons survive as well; Craig A. (Ellen) Powell of Fishers, IN and Matthew J. (Renee) Powell of Plymouth. His sisters are: Joan (Ronald) Brown of Concord, NC and Beverly (Paul) Proeschel of Eaton, OH.
He was preceded in death by his first wife, Charlotte, and his parents.
Visitation will be on Tuesday September 22, 2015 from 4-8 PM in the Johnson-Danielson Funeral Home, 1100 N. Michigan Street, Plymouth.
Funeral services will be held at 11 a.m. on Wednesday, September 23, 2015 at Calvary Lutheran Church, 1314 N. Michigan Street, Plymouth with Pastor Eric Ahlemeyer officiating. Visitation will resume one hour prior to the service in the church. Military Honors provided by members of the American Legion Post 27, Veterans of Foreign Wars- Marshall County Post 1162 and D.A.V. following the funeral.
Burial will be held at 2 p.m., local time, on Thursday, September 24, 2015 in the Sugar Grove Cemetery in West Alexandria, OH.
Memorial contributions can be made to the Calvary Lutheran Church or Center for Hospice Care 112 S. Center St. Plymouth IN 46563.