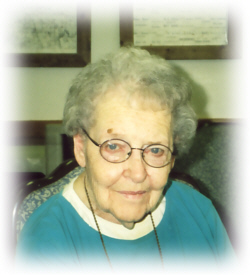 Dora B. Holland, 89, a lifetime Marshall County resident, formerly living on Randolph Drive, died of natural causes, on Tuesday, August 14, 2007, at 2:30 p.m. in the Pilgrim Manor Care Center. Dora was born the daughter of Lyman and Myrtle Mullins Gordon on May 3, 1918 in Hoopston, Ill.
She graduated from LaPaz High School.
On February 18, 1941, in Plymouth, Dora and Morris C. Holland were married. Morris died on August 21, 1987.
A homemaker, Dora loved cooking and especially baking. She was a gardener for many years and enjoyed making beautiful dried floral arrangements.
Dora served as a volunteer for the St. Joseph Hospital Auxiliary.
A member of the Trinity United Methodist Church, she was active with the Mary and Martha Club. She is survived by a daughter and two sons. They are daughter, Sharon L. Dickey: David M. and Cindy Holland and Kevin R. and Susan Holland, all of Plymouth.
Four grandchildren also survive: Ashley Holland, Jeff (Shelli) Dickey: Dawn (Kent) Thomas and Misty (Broc) Buczolich.
Six great-grandgrandchildren survive as well. They are: Kylie, Kassie, Karlie, Jamie, Jenna and Zachary.
Three sisters and two brothers preceded Dora in death. They are: infant Joan Gordon, Betty Howard, Edith Kepler, Walter and Donald Gordon.
Family services will be held at 2 p.m. Thursday, August 16, 2007 in the Johnson-Danielson Funeral Home, 1100 N. Michigan St. Plymouth, officiated by Michael Burroughs. Friends may call one hour prior to services.
Interment will be in Oakhill Cemetery, Plymouth.
Memorial gifts in Dora’s memory may be made to the Marshall County Hospice and Palliative Care, the Trinity United Methodist Church or to a charity of the donor’s choice.