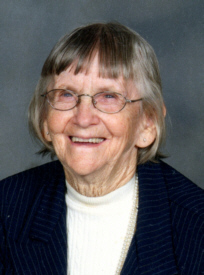 Dora E. McLean, 85, passed away on Wednesday, November 26, 2014 in her home.
Born June 12, 1929 in Mishawaka, Indiana, Dora was the daughter of Lloyd and Hattie (Snyder) Dankert. The family moved to Walkerton in 1934, where she graduated from John Glenn High School with the class of 1948.
On May 28, 1948 Dora married Lyle Lancaster in LaPaz. The couple milked 60 head of cattle and farmed 140 acres. He would precede her in death on February 3, 1970. On June 12, 1971, she would marry Charles J. McLean in Walkerton. The couple got into antiquing and sold them until his passing in 1996.
Dora worked at Uniroyal, at Delco Truck Stop as a head cook at nights and worked at Bremen (Coral) Maax Glass. She began selling Avon in 1975, after selling the farm and moving to Plymouth. Dora walked and sponsored Hospice for over 6 years, walking the six miles. She loved to help anyone in any way she could. She is a member of the Rebekkah Lodge in Walkerton and Calvery Baptist Church in LaPaz.
She is survived by her daughter, Mary (Ralph) Young of LaPaz and son, Dale (Judy) Lancaster of LaPaz. Her grandchildren are: Corie Young, Ryan Young, Tracie Lancaster and D.J. Lancaster, as well as, 19 great-grandchildren, 6 great-great grandchildren and a sister Dorothy Kinney.
She was preceded in death by his parents, husbands Lyle and Charles, and siblings: Deloris Haney and Ed Dankert and two great grandchildren Angel and Willow.
Visitation will be from 4-7 p.m. on Saturday, November 29, 2014 in the Johnson-Danielson Funeral Home, 1100 N. Michigan Street, Plymouth. Funeral services will be held at 1 p.m. on Sunday, November 30, 2014 at the Calvary Baptist Church, 330 Cortland Street, Lapaz. Pastor Nathan Rettinger will officiate. Visitation will resume one hour prior to the funeral.
Burial will be in the Woodlawn Cemetery, Walkerton.
Memorial contributions can be made to Marshall County Hospice 112 South Center St. Suite C Plymouth IN. 46563