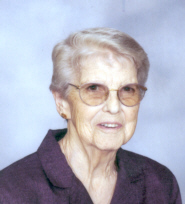 Doris A. (Long) Lamborn, 80, died following a cancer related illness at 11:40 a.m. Saturday, April 9, 2005. A resident of 13634 W. 6A Road, Doris died at home in the care and company of her family and the Marshall Co. Hospice.
She was born January 10, 1925 in North Liberty, Ind., the daughter of Francis Arthur and Ollie M. (Johnson) Long. At the age of 7 the family moved to Marshall County where she attended school and graduated from Tyner High with the Class of 1944.
Doris immediately began working for Meck Industries in Plymouth and then on July 27, 1946 in Kingman, Ind. she became the bride of Ralph C. Lamborn. In 1950 Doris decided to leave Meck’s and worked at home with her husband in his business answering the phone and keeping records as she also raised their two children.
In 1966 Doris went to work at Town & Country Press, which then became Indiana Press and after 20 years of service, she retired on December 31, 1986. In her spare time she enjoyed crocheting, making ceramics and working in her flower and vegetable garden, often giving extra produce to neighbors and friends.
She especially enjoyed camping with family and friends for many years in the woods at the home of Glenn and Margaret Markley. Doris new a good hand of cards and played to win while wearing her infectious smile.
Doris is survived by her husband Ralph of 58 years and their daughter; Debra Sue (C. Jon) Bixel of Plymouth and son; Dennis Brian (Gloria) Lamborn of Mishawaka, along with five granddaughters; Amy (Ted) Rotering of Grovertown, Melissa Bixel of Plymouth, Melanie (Matt) Brown of Argos, Holly Lamborn Hostetler and Forest Ann Lamborn both of Mishawaka and one grandson; William (Cosette) Hesler of Vancouver, Wash. Five great-grandchildren include; Christine and Aron Rotering of Grovertown, Bailey Porter and Leita Hesler of Vancouver, Wash., and Victoria Hostetler of Mishawaka. Three sisters, Betty Geible of Sebring, Florida; Grace (John) Hutchings of Enid, Oklahoma and Mary Dare of Teegarden survive along with a sister-in-law Janet Long of South Bend and numerous nieces and nephews.
Preceding Doris in death were her parents, two brothers Glenn and Art Long, a sister-in-law Helen Long and brothers-in-law Clark Dare and Harry Geible.
Friends may visit with the family from 3 – 8 p.m. on Tuesday, April 12, 2005 in the Johnson-Danielson Funeral Home, 1100 N. Michigan St. Plymouth and continue after 7 a.m. on Wednesday until time of services at 10:30 a.m. in the funeral home. Close family friend, Rev. Paul McBride will officiate, assisted by Rev. Wm. Kaster pastor of Trinity United Methodist Church where Doris was a member.
Burial will follow in the New Oakhill Cemetery, Plymouth. Memorial gifts may be made to the Marshall County Hospice, 112 S. Center St. Suite C, Plymouth, Indiana 46563 or to the Donor’s Choice.